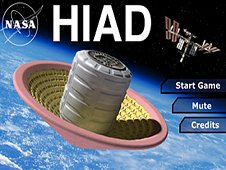 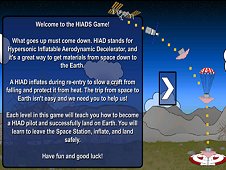 The welcome screen of the Hypersonic Inflatable Aerodynamic Decelerator, or HIAD, app. (NASA)
View large image Want to try your hand at landing an inflatable spacecraft? All you need is a smart phone, a computer or a tablet.

NASA's new educational computer game based on its Hypersonic Inflatable Aerodynamic Decelerator (HIAD) project can be played on the Internet and downloaded free on Apple and Android mobile devices.

To make the HIAD inflatable spacecraft, giant cones of inner tubes are stacked together to form an innovative spacecraft for transporting cargo to other planets or bringing cargo back from the International Space Station. The ability to transport cargo to and from the station is essential to living and working on the orbiting platform, as food and supplies are ferried back and forth. It's also key to getting new investigations to the station and getting many results of experiments back for analysis on Earth.

"This game will help introduce new generations to NASA technologies that may change the way we explore other worlds," said Mary Beth Wusk, HIAD project manager at NASA's Langley Research Center in Hampton, Va. "It gives players an idea of some of the engineering challenges rocket scientists face in designing spacecraft, and does it in a fun way."

The game's goal is to create an inflatable heat shield that returns cargo from the space station to Earth. As the game's instructions put it, "to successfully guide an inflatable spacecraft through the super heat of atmospheric reentry requires the right stuff. If you inflate too early, your shape is incorrect or your material isn't strong enough -- you burn up. And if you get all that right and miss the target the mission is a bust."

The game offers four levels of engineering mastery and gives stars for each successful landing.

HIAD is more than just a game. It's a real technology being tested in laboratories and in flight. A prototype HIAD launched July 23 from NASA's Wallops Flight Facility on Virginia's Eastern Shore. The successful flight test demonstrated that lightweight, yet strong inflatable structures may become a practical way to help us explore other worlds.