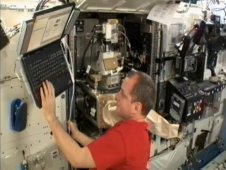 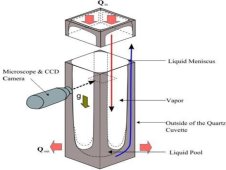 Pentane-containing cuvette used in the experiment. The cuvette are about 20 to 40 mm tall. (NASA)
View large image 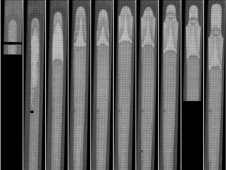 Composite image of cuvettes at different heat fluxes from 0 to 3.0 W of the 40 mm module. The images show the evaporation and condensation regions and will be used to calculate the curvature gradient of the liquid-vapor pool. (NASA)
View large image What happens when electronics overheat? The short answer is: nothing good! In microgravity, natural convection does not occur, which makes cooling equipment a challenge. So how do you keep electronic and computer components from overheating in space?

In satellites used for communications, global positioning systems, and defense purposes, a heat pipe is the device used to regulate temperature and keep the overall systems operating reliably. A heat pipe is a simple device that can efficiently transfer heat from a hot spot to a cooler remote location without the use of a mechanical pump.

To further insights into the operation of a heat pipe in space, scientists launched an investigation called the Constrained Vapor Bubble, or CVB, to the International Space Station. The Constrained Vapor Bubble is the prototype for a wickless heat pipe and is the first full-scale fluids study in the Fluids Integrated Rack or FIR facility flown on the U.S. module of the space station. The experiment completed on March 1, 2011, when the crew removed the fourth module for return on STS-135.

A heat pipe is usually a sealed tube in which all the air is removed and a small amount of liquid is introduced under a partial vacuum. A portion of the liquid in contact with a hot surface evaporates into a vapor as it absorbs heat from the hot surface. The vapor condenses back to a liquid when the vapor comes in contact with a cool surface, thus releasing its stored or latent heat to the cold surface. The liquid then draws back toward the hot surface, due to the interaction of the individual liquid molecules and their attraction to the surface of the container -- a process called capillary action. The whole liquid and vapor cycle requires no moving parts and the heat transfer process can repeat indefinitely.

Nearly all heat pipes contain wicks or grooves that enhance capillary action and promote the pumping of the working liquid from the cool liquid pool back to the hot surface where the liquid can evaporate again. "The wicks or grooves are complex to fabricate inside the tube and add weight to the heat pipe. Heat pipes built without wicks hold open the possibility of significant weight savings for space flight," says Constrained Vapor Bubble Project Manager Ronald Sicker, NASA's Glenn Research Center in Cleveland.

The Constrained Vapor Bubble experiment represents state-of-the-art heat pipe research. It uses a cuvette pipe, which is a rectangular-shaped glass tube made of quartz, filled with a fluid called pentane. This design allows for temperature measurement along the Constrained Vapor Bubble with great accuracy. The transparency also enables observation of the fluid flow to allow scientists to measure the size and shape of the menisci -- the shape of the fluid as it climbs the interior walls of the cuvette.

Constrained Vapor Bubble heat pipes were operated on Earth and then launched into space and operated in the microgravity environment of the space station. "Heat pipes operate at a considerably higher temperature and pressure in microgravity than they do on Earth," explains Constrained Vapor Bubble Principal Investigator Joel Plawsky, Rensselaer Polytechnic Institute in Troy, New York. "The reason for this behavior is that in microgravity, there is no gravity-driven natural convection to help cool the heat pipe surface. The only way heat pipes can lose heat in space is to radiate that heat directly to the environment."

This investigation will help increase the understanding of the basic principles controlling these events and help improve efficiency of the cooling equipment. "The heat pipes offer the potential for ultra-reliable heat transfer, since they contain no moving parts like pumps or compressors that can eventually wear out and fail. However, it is one thing to use heat pipes in a machine and quite a different story to use them in human space vehicles. If heat pipes are to be used to support long-term manned exploration missions, their scope and scale would have to be greatly expanded and the risks of using them in microgravity better understood. Studying heat pipe performance in microgravity is thus critical, if we are to eventually use heat pipes as a primary heat transfer technology on long-term manned missions," added Plawsky.

The Fluids Integrated Rack also contains the Light Microscopy Module or LMM, which is a completely automated optical microscope that can be controlled from Earth. The microscope allows for recording visually the changes taking place within the Constrained Vapor Bubble and the recording of the liquid levels and the changes in the bubble of pentane vapor.

"The fluid mechanics and heat transfer provide the fundamental knowledge base necessary for designing and developing improved heat pipe technologies," said Plawsky. "The data we collect and analyze will also help solve fundamental problems in the fields of boiling, evaporation, condensation, adsorption, and evaporative self-assembly. The results of the experiment will benefit a whole host of technologies on Earth ranging from conventional air conditioning/refrigeration systems and devices to cool microelectronics to the fabrication of self-assembled systems such as photonic crystals."

For a journal article on this research see: