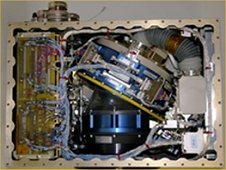 The complete Geoflow laboratory experiment that was installed on the International Space Station. Geoflow is used to verify and improve computer models of fluid convection. (ESA)
View large image 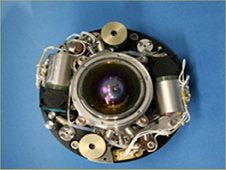 Inside the Geoflow experiment two revolving concentric spheres heat a liquid. By observing how the liquid moves in response to temperature differences, scientists are verifying and improving computer models of fluid convection. (ESA)
View large image 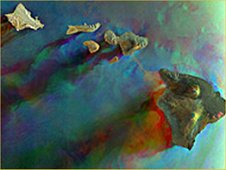 This Envisat radar image features six of Hawaii's eight major volcanic islands. Visible from right to left are the Big Island of Hawaii, Kahoolawe, Maui, Lanai, Molokai and Oahu. In addition to two other major islands, there are also 124 islets. This image was created by combining three Envisat radar scans (March 27, 2006, April 16, 2007 and January 21, 2008) of the same area. The colors in the image result from variations in the surface that occurred between acquisitions. (ESA)
View large image European Space Agency, or ESA, astronaut André Kuipers is running experiments on the International Space Station that are shedding light on conditions deep inside Earth. Orbiting some 248 miles (400 km) above us, Geoflow is offering insights into the inner workings of our planet.

Descending 1,864 miles (3,000 km) under our feet, Earth's mantle is a semi-solid fluid under our thin outer crust. The highly viscous layers vary with temperature, pressure and depth.

Understanding how the mantle flows is a major interest for geophysics because it could help to explain earthquakes or volcanic eruptions. Computers can model it, but how can scientists be sure they are correct?

The deepest that humans have ever drilled is just over 7.5 miles (12 km), so investigating the mantle directly is out of reach for the immediate future.

Instead of probing Earth's depths directly, six European teams led by the University of Cottbus in Germany looked to recreate aspects of mantle flow in a laboratory. Experiments simulating these conditions can verify and improve the computer models.

This poses a different problem, however. How can gravity be simulated without Earth's gravity itself influencing the results?

The solution is to send an experiment to our largest weightless laboratory: the International Space Station.

Planet in a box
ESA sponsored the development of an experiment that mimics the geometry of a planet. Called Geoflow, it contains two revolving concentric spheres with a liquid between them.

The inner sphere represents Earth's core, with the outer sphere acting as the crust. The liquid, of course, is the mantle.

Free from the influence of Earth's gravity, a high-voltage electrical field creates artificial gravity for the experiment.

As the spheres rotate slowly and a temperature difference is created between the shells, movement in the liquid is closely monitored. The temperatures can be controlled down to a tenth of a degree.

André has seen plumes of hotter liquid rising towards the outer shell -- as predicted by computer simulations.

Mushroom-like plumes in fluids exposed to strong temperature differences might explain the Hawaiian line of volcanoes in the South Pacific.

A better understanding of our planet is not the only outcome of Geoflow. The results could also benefit industry by improving spherical gyroscopes, bearings and centrifugal pumps, for example.

This original story was written and published by the ESA on June 12, 2012.