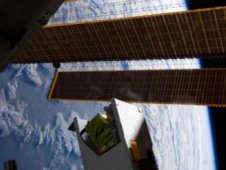 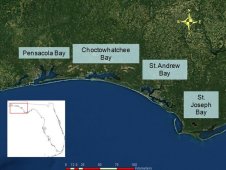 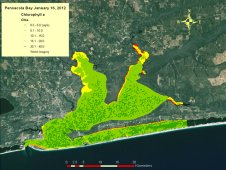 Map of chlorophyll-a for Pensacola Bay derived from HICO data. Higher values (yellow and red) indicate high chlorophyll concentrations in the water that suggest algal blooms are present. Algal blooms can reduce oxygen levels in the water, leading to fish and other animal kills. Some algal blooms also contain organisms that produce toxins harmful to other life, including humans. (EPA)
View large image When planning a beach vacation, you have the usual check list: sun block, check! Beach towel, check! Scan of the coastal waters for healthy conditions, check -- er, what? Thanks to International Space Station technology, the U.S. Environmental Protection Agency, or EPA, has a new tool that may soon give beach goers the ability to know before they go, using their mobile devices to complete that check list.

This ongoing EPA project is much more than just a vacationer's tool. The data collected comes from a space station instrument called the Hyperspectral Imager for the Coastal Oceans, or HICO. The EPA intends to use the information from HICO as proof-of-concept to help monitor and protect the nation’s water supplies as required by the Clean Water Act. Protected waters include those that support aquatic life, recreation, fishing, and drinking sources.

"Policy makers, scientists, businesses, and environmental managers will be able to collaborate and connect, as information is shared among groups that are studying the same system. They will also be able to view available data and historical data," said EPA Research Oceanographer Darryl Keith, Ph.D.

Mounted on the Japanese Module Exposed Facility aboard station, the HICO instrument has a primary mission of collecting coastal ocean region data for civilian and naval research. As a hyperspectral imaging instrument, HICO “sees” beyond the usual spectrum of light we can see -- essentially visible red, blue and green -- into more than 100 bands of varied wavelengths. These scans record useful information in near-ultraviolet, visible, and near infrared wavelengths of 0.38 to 0.96 micrometers, producing highly detailed images.

Each physical material reflects solar energy in a unique wavelength spectrum; this can be thought of as the material's "fingerprint." When HICO scans an area of water, everything from seaweed to sea foam has its own signature spectrum. This data can even reveal chemical compounds and marine life that are invisible to the human eye. Researchers know what wavelengths match to which chemical and biological elements, enabling them to use HICO data to map out the water conditions and reveal the coastal contents.

The images from HICO also are at a high level of spatial detail, meaning that the data clearly shows relatively small features, like freshwater inlets or small embayments. This makes the data particularly well-suited for water quality monitoring, according to Keith, who works with the Atlantic Ecology Division of the EPA in Narragansett, RI.

"The datasets from HICO are ideal for [EPA] research, because the 100 meter spatial resolution of the data allows us to retrieve spectral data from water bodies that are below the resolution of the present suite of space borne ocean color sensors," said Keith. "We now have the capability to develop algorithms that model aquatic processes and their responses to environmental stressors for waters of interest to the public and state and federal monitoring agencies."

Keith was part of a collaborative team of EPA and U.S. Navy scientists that won a Pathfinder Innovation Project exploratory grant from the EPA Office of Research and Development. The award allowed the team to apply HICO data to water quality monitoring, specifically for several northeastern Gulf of Mexico bays along the Florida Panhandle. The imager is unique in this effort, because it can scan specific areas at higher resolution near the land-water interface.

As part of his research, Keith registered as a HICO investigator for the EPA project, downloading 31 scenes from 2010 to 2012 for analysis and examined the images for several water quality indicators, such as chlorophyll-a and colored dissolved organic matter. The project team then compared this HICO data with actual water samples collected within 1.5 hours of the space station pass. The on-location surveys of the coastal areas provide field validation or "ground truth," confirming HICO as a reliable data source.

This result enabled the team to develop math models to predict and map water conditions. The EPA study findings may allow coastal ecosystem researchers to keep tabs on water quality in near real time using HICO's hyperspectral data, instead of having to send scientists into the field.

"The advantage now is that financial and logistical resources can be used and deployed in more efficient ways to accomplish field validations using a very small number of sampling stations," said Keith.

The EPA plans to continue using HICO to see if the imager can also help with mapping other water quality indicators, such as total suspended matter and salinity -- salt content. Some of the areas considered for future scans include the coastal waters of Puerto Rico, North Carolina and New England, according to Keith. The EPA team plans to create a mobile app to use as a tool for monitoring current water conditions. This means more educated decisions for everyone from scientists to the tourists who are looking to complete that final check on their list for the perfect day at the beach.