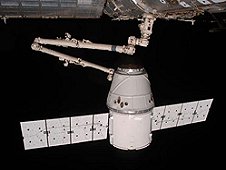 View from the International Space Station of the SpaceX Dragon spacecraft as the robotic arm moves Dragon into place for attachment to the station May 25, 2012. (NASA)
View large image 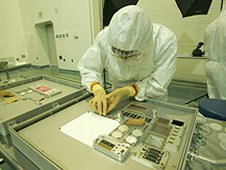 Miria Finckenor, materials engineer at the Marshall Space Flight Center, removes a sample from a Materials International Space Station Experiment (MISSE) Passive Experiment Container at Langley Research Center. Approximately 35 members of the MISSE team traveled from across the country to witness the "grand opening" of MISSE-1 and 2 in 2005. (NASA/Jeff Caplan)
View large image He described it as "snow white." But NASA astronaut Don Pettit was not referring to the popular children's fairy tale.

Rather, he was talking about the white coating of the Space Exploration Technologies Corp. (SpaceX) Dragon spacecraft that reflected from the International Space Station's light. As it approached the station for the first time in May 2012, the Dragon's trunk might have been described as the "fairest of them all," for its pristine coating, allowing Pettit to clearly see to maneuver the robotic arm to grab the Dragon for a successful nighttime berthing.

This protective thermal control coating, developed by Alion Science and Technology Corp., based in McLean, Va., made its bright appearance again with the March 1 launch of SpaceX's second commercial resupply mission. Named Z-93C55, the coating was applied to the cargo portion of the Dragon to protect it from the rigors of space.

"For decades, Alion has produced coatings to protect against the rigors of space," said Michael Kenny, senior chemist with Alion. "As space missions evolved, there was a growing need to dissipate electrical charges that build up on the exteriors of spacecraft, or there could be damage to the spacecraft's electronics. Alion's research led us to develop materials that would meet this goal while also providing thermal controls. The outcome of this research was Alion's proprietary Z-93C55 coating."

Kenny said Alion thoroughly tested the newly formulated coatings in the lab and provided them for NASA's Materials International Space Station Experiments (MISSE)-1 and 2 for further evaluation. MISSE-1 and 2, a test bed for materials and coatings flown on the outside of the station, evaluated the effects of atomic oxygen, direct sunlight, and extremes of heat and cold. The experiment allowed the development and testing of new materials to better withstand space environments, and the results provided an improved understanding of the durability of various materials when they are exposed to the space environment.

"Z-93C55 performed beyond expectations on MISSE, so it is now a viable alternative to the standard thermal control coatings," said Kenny. "The flight data provided through the MISSE experiments was essential to its development."

NASA's Marshall Space Flight Center in Huntsville, Ala., was responsible for performing the pre- and post-flight measurements of these coating materials.

"We measured the optical properties the same as we would for flight hardware, before and after the MISSE flight," said Miria Finckenor, Marshall engineer and MISSE investigator. "We also looked for any mass loss, any cracking or flaking, and any changes in fluorescence due to space environmental effects."

Z-93C55 is a two-part system consisting of a pigment and a binder solution. Special additives enhance electrical conductivity without affecting thermal control properties, so the cured coating can handle high temperatures and survive the stresses of launching.

"The coating is actually an improved version of our Z-93P coating, which has had a long history in the aerospace industry," said Kenny. "It was used on Apollo missions, the station's radiators and many other missions. Z-93C55 is a thoroughly tested and qualified material, having gone through extensive testing in space simulation chambers and experimental missions."

The coating also was used on NASA's Juno, Gravity Recovery and Interior (GRAIL) and Mars Reconnaissance Orbiter missions, among others.

This unit can be easily transported to anywhere in the world efficiently and is much more cost-effective. Experts sprayed more than 250 square feet of coatings -- about 10 gallons for each trunk -- onsite at SpaceX facilities in California and Florida to prepare for launch.

"When most people think about coatings, they're probably thinking about paint that makes their bedroom or kitchen look good, or a shiny coat of wax for their car," said Kenny. "But we get to work on coatings that help critical systems perform better and last longer, in space and here on Earth. And that means we're helping important missions of all kinds succeed, every day."