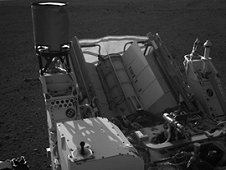 This photo shows the coated fins, center, on Curiosity's Multi-Mission Radioisotope Thermoelectric Generator. The protective coating on the fins was tested as part of the MISSE-2 investigation aboard the International Space Station. (NASA)
View large image 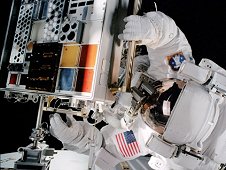 Mission Specialist Patrick Forrester opens a Materials International Space Station Experiment, or MISSE, passive experiment container installed on the International Space Station airlock. Nearly four thousand samples have been flown as part of the MISSE experiments in the last 11 years. (NASA)
View large image A coating that survived long-term exposure on the International Space Station took an even longer journey on the Mars Curiosity Rover and is protecting the craft's critical power unit as it collects data on Mars. Not all space environments are the same, but if a material can survive for a long time in one space environment, it may prove useful for longer exploration missions.

Curiosity's paint-like spray coating, AZ-2100-IECW, was exposed to the harsh space environment for four years as part of the Materials on International Space Station Experiment (MISSE) investigation. The coating, tested and developed by AZ Technology in Huntsville, Ala., met stringent outgassing requirements and withstood temperature extremes and thousands of hours of ultraviolet radiation from the sun, making it an ideal candidate for the cooling fins on Curiosity's power unit.

"It's exciting to be part of the Mars Science Laboratory mission and see our work on the surface of Mars," said Lynn Leeper, AZ Technology president and chief executive officer. AZ Technology has been developing spacecraft paint and coatings for more than 20 years and has been involved in a number of successful spacecraft and space materials experiments. The company provided 19 different paints, including the AZ-2100-IECW, for the MISSE-2 investigation, which flew from August 2001 to July 2005.

The MISSE materials test bed has provided data on the durability of materials that have helped spacecraft designers shorten the development time for satellite hardware components by 50%. Shorter development times result in more affordable spacecraft and ensure materials perform as expected in challenging space environments.

The EC in the coating used for Curiosity stands for electrically conductive. Static electricity can build up on a spacecraft as it is exposed to proton and electron radiation. Electrically conductive or static-dissipative coatings can help protect the electronics from getting zapped. AZ Technology's coating was applied on the Multi-Mission Radioisotope Thermoelectric Generator, or MMRTG. This power unit converts the heat from decaying plutonium-238 into electricity that the Curiosity rover needs to survive.

"Our company has coated parts for many satellites, the International Space Station, and extra-orbital missions, but typically we do not get to see pictures of our work in such an amazing setting," added Leeper. "It makes us feel much closer to the adventure."

The potential for future exploration projects to benefit from space station technology continues to expand, thanks to ongoing use of the orbiting laboratory as a technology test bed. Currently MISSE-8 operates externally aboard the space station, continuing to aid in developing advanced materials to Mars and beyond.