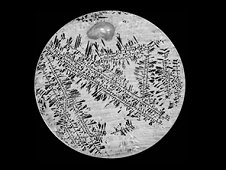 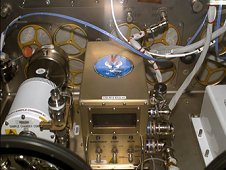 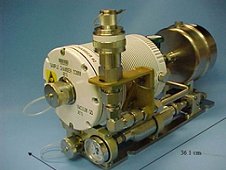 One of the six Sample Processing Units (SPUs) used on the International Space Station. The SPUs contain the Coarsening in Solid-Liquid Mixtures-3 lead-tin dendrite samples. (Credit: NASA)
View large image Like snowflakes or frost on windshields, metallic castings form crystals. Known as dendrites, these crystals form and grow, or coarsen, following crystallization from a vapor or a liquid. Coarsening occurs during the processing of metal alloys and affects everything from dental fillings to turbine blades.

Dendrites that form in metal castings resemble Christmas trees with randomly spaced branches. While it's not fully understood, the strength of metal castings is in some way related to the spacing in those dendrite arms.

"What we're studying is spacing between the dendrite arms and how their shape evolves as a function of time," said Peter Voorhees, Coarsening in Solid-Liquid Mixtures, or CSLM-3, principal investigator at Northwestern University in Evanston, Ill. "We're interested in studying metallic dendrites because of the connections between those dendrites and the properties of castings made from metals."

The CSLM-3 investigation is currently taking place aboard the International Space Station. CSLM-3 samples are a mixture of lead and tin fashioned into 0.75- by 0.5-inch hockey pucks. Each of the six samples is in its own sample processing unit, a kind of furnace that heats to 365 degrees Fahrenheit (185 degrees Celsius).

"We want to study this evolution process in a very carefully controlled fashion without all the complications that you find on Earth, such as sedimentation. That's why we have to go to space," Voorhees said.

Much in the same way that ice floats to the top in a glass of water, dendrites settle to the top of the sample because of the density difference between the solid and the liquid. CSLM-3 will use the microgravity environment of space to greatly reduce this sedimentation. Without the influence of gravity, instead of floating to the top, the dendrites will uniformly distribute throughout the sample. This makes it easier to study the coarsening process and the evolution of dendrite arms over time.

Dendrite arms can also pinch off. Once that happens on Earth, the detached arm floats to some other part of the casting where it can merge with another dendrite and change the property of the material. In space, if and when it pinches, it's not going to go anywhere.

"That's something we'll be able to check," Voorhees said. "What we'll be able to see quite clearly is the evolution of this pinching process. Maybe we can shed some light on which one of these proposed mechanisms are actually leading to the pinching."

While the CSLM-3 samples are processed on the space station, the analysis will be done on the ground. Once the samples return to Earth, the principal investigator and his team will begin the time consuming task of dissecting and studying them under microscopes. While the analysis could take years, the samples themselves could have a short life span.

“This is one of the few times an experiment will return on the same flight that delivered it to the space station," said Bob Hawersaat, CSLM-3 project manager at NASA's Glenn Research Center in Cleveland. "We're going to go up in the Dragon capsule on the second SpaceX cargo resupply mission in March, then operate the experiment on board the station and then return it on the same return flight. The reason we're doing that is because the samples have a 100-day sample life. We need to go up and come right back. I think that's the first time we've done something like that with physical science experiments."

Another challenge facing the scientists is the low melting point of the sample. They could coarsen even at room temperature. That would change the samples that were solidified in space, making it even more challenging to analyze the data. To prevent this and preserve them for later analysis, they are kept on ice.

"When the samples return from the space station, they will be placed on dry ice," Voorhees said. "We'll bring them home and put them into a freezer that's held at -112 degrees Fahrenheit (-80 degrees Celsius)."

Researchers hope that CSLM-3 can provide fundamentally new insights into how the coarsening process occurs in dendritic structures over time. That knowledge could lead to better models.

Developing accurate models of the coarsening process is central to creating a wide range of new, stronger materials from those used in automobiles and jet turbine blades, to those used in space applications.