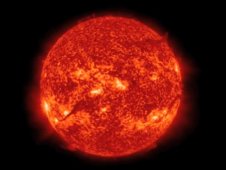 Solar storms, like this coronal mass ejection on Aug. 31, 2012, can propel a billion tons of charged particles and radiation into space. Occasionally, these eruptions are directed towards Earth, prompting special protective measures for astronauts aboard the International Space Station, as well as aircraft crew on transpolar flights where risk to exposure is greatest. (NASA SDO)
View video 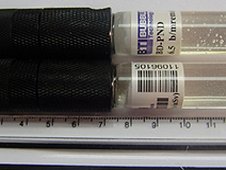 Radi-N2 bubble detectors are filled with a gel, inside which are liquid droplets that help quantify neutron radiation inside the International Space Station. (Canadian Space Agency)
View large image Space can be a potentially hazardous environment to live and work in, especially when it comes to radiation. Originating from violent storms on the sun and galactic cosmic rays produced in distant supernovae explosions, this natural radiation can pose a serious health risk for astronauts on long-duration space missions like those on the International Space Station.

Like a protective bubble, Earth's atmosphere and magnetosphere shields life on our planet from this never-ending bombardment of high-energy particles. However, in low-Earth orbit where the space station flies, astronauts are regularly exposed to high doses of radiation, including charged particles trapped in Earth's magnetic field, as well as cosmic rays and solar radiation.

To prepare for future missions that may last for months or years, the Canadian Space Agency, or CSA, along with other space agencies around the world, have been stepping up research into radiation biology in recent years, recognizing that it deserves the highest priority.

During CSA astronaut Chris Hadfield's mission to the space station, he will carry a new set of instruments into orbit to measure one of the most serious types of radiation -- caused by high-energy neutron particles -- and monitor the dose an astronaut absorbs during space flight.

What is Neutron Radiation?

Neutron radiation is considered to be one of the most severe of all types of radiation experienced in space as it can cause biological damage. It represents approximately 30 percent of the total exposure for those aboard the station. In space, neutrons are produced when charged particles collide with physical matter, such as the walls and equipment on the space station. Just like medical X-rays, these high-energy particles can shoot through delicate body tissues, and through long-term exposure, they can damage DNA and potentially cause cataracts, bone marrow damage or even cancer.

It's all in the bubbles -- Bubbles and Radiation Trouble

Radi-N2 is Canada's second generation of neutron radiation monitoring aboard the station and continues on where fellow Canadian astronaut Robert Thirsk and the original Radi-N experiment left off in 2009.

A collaborative effort between the CSA and Russia's RSC-Energia and State Research Center of Russia Institute of Biomedical Problems, or IBMP, Russian Academy of Sciences, the Radi-N2 study will have Hadfield and fellow crew member Roman Romanenko measure the neutron radiation levels on the station while onboard the station for Expedition 34/35.

Radi-N2 uses bubble detectors produced by a Canadian company, Bubble Technology Industries of Chalk River, Ontario, designed to focus on detecting neutrons while ignoring other types of radiation. Bubble detectors have been used in space for more than two decades on space shuttle missions and the MIR space station, and have become popular because of their accuracy and convenience.

Eight of these finger-sized instruments are going to be placed by Hadfield and Romanenko around various space station modules. Each detector is filled with a clear polymer gel, inside which are liquid droplets. When a neutron strikes the test tube, a droplet may be vaporized. This creates a visible gas bubble in the polymer. Each bubble, which represents neutron radiation, is then placed within an automatic reader and counted.

CSA's support of radiation research will not only lead to major advancements for future human exploration of space but also in our knowledge of the health risks of radiation, such as cancer, neurological damage and degenerative tissue disease.

This original story was written and published by the Canadian Space Agency on Dec. 12, 2012. Date modified: