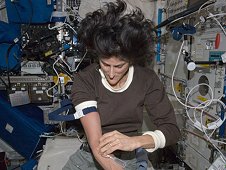 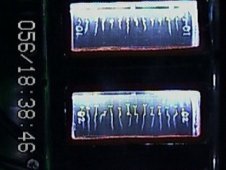 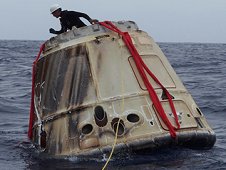 The Dragon spacecraft is secured before being transported back to a SpaceX facility. May 31, 2012. (SpaceX)
View large image While the first NASA Commercial Resupply Services (CRS) flight to the International Space Station is historic, the delivery and more importantly the return of science samples is pivotal. Since the retirement of the shuttles, the only return capability available from the space station was via the Russian Soyuz vehicle, with cold stowage even more limited -- but not anymore. Space Exploration Technologies Corp., or SpaceX, is now able to provide this service, as well.

SpaceX CRS-1 mission, using the Falcon 9 rocket and Dragon cargo spacecraft, launched Oct. 7, with a planned station docking date of Oct. 10. This is the first of 12 contracted flights to resupply the station, providing a new U.S. capability to deliver and return cargo -- including science investigations, particularly those that require cold stowage. A successful demonstration flight to the station completed in May.

Dragon will return to Earth with close to 866 pounds of scientific supplies -- including samples from research involving human health, biotechnology, and materials research, along with educational investigations and approximately 518 pounds of station hardware. Though resupply is important, significant science sample return capability is exciting for the research community.

This return capability will considerably enhance the amount of science that can be done, as it allows for samples to return home in a timely manner for analysis. This also frees up cold stowage space aboard station for new samples and continued research, as many samples have been kept in cold stowage until a ride home was available. Often times, researchers cannot complete analyses until the on-orbit samples are returned and evaluated.

"While some of this data can be obtained by on orbit analysis, many analysis techniques have not been miniaturized or modified to allow them to be performed on orbit, which means sample return is the only way to obtain this data," said Marybeth Edeen, deputy manager for the International Space Station Research Integration Office.

Though manifests can change, currently there are many research samples from a variety of investigations scheduled for return when the Dragon spacecraft returns to Earth.

Several ongoing investigations -- Nutrition, Pro-K, Repository, and Biosphosphonates -- have samples returning on Dragon, providing additional data for researchers working on these investigations. All four of these studies involve understanding changes to the human body when exposed to microgravity conditions, especially for long-durations. Specifically, this research looks at bone health, blood chemistry and hormonal changes, as well as oxidative damage and human physiological changes and adaptation.

"Biological samples from the crew and life sciences experiments are frozen on orbit and returned to allow researchers to understand exactly what changes occurred as a result of the exposure to microgravity," Edeen said.

Information from these studies assists with determining ways to counteract these changes, while helping to define nutritional requirements and develop food systems for future exploration missions. Already data from this research, and previous similar studies, have resulted in new information that should prove beneficial to astronauts during extended space flights, as well as people on Earth with similar health conditions.

Another investigation with returning samples is Plant Signaling, which involves studying how microgravity affects plant growth. The goal is to understand the molecular mechanisms plants use to sense and respond to changes in their environment. Seeds are stored in seed cassettes for transport to the station. Seeds stay in the cassette during the investigation phase, with the crew then storing the sample cassettes in the MELFI freezer for return to Earth and the researchers' labs for analysis. This research is important in providing sustainable resources for future missions -- food, carbon dioxide removal and oxygen generation. Other benefits could include improved crop production on Earth, based on a better understanding of how plants grow.

Astronaut's Energy Requirements for Long-Term Space Flight investigation, known as ENERGY, measures changes in energy balance in crew members following a long-duration flight. Returning samples from several of the subjects will contribute to information about energy expenditure in microgravity, leading to an improved understanding of the nutrition required for extended stays in space.

NASA's teenage researchers are also included for this notable flight. The winners of the YouTube Space Lab contest, will be getting results from their investigations, once they have analyzed their return samples. These young scientists designed their experiments to look at how microgravity affects the predatory habits of jumping spiders; and any resulting adaptation and possible microgravity effects to the anti-fungal properties of Bacillus subtilis.

Twenty-three investigations, involving students from many communities across the country, are on the manifest for delivery to the station and return home on the Dragon. These student research projects are part of The Student Spaceflight Experiments Program (SSEP). This program gives students the chance to design and propose investigations that study the effects of microgravity on physical, chemical and biological systems.

Other new investigations being delivered aboard the Dragon include the opportunistic Candida albicans, the most common human fungal pathogen and the cause of yeast infections. The Genotypic and Phenotypic Responses of Candida albicans to Spaceflight, or Micro-6, investigation will also be returned when Dragon returns to Earth. This type of fungus causes superficial to life-threatening infections, as the yeast fungus becomes reactive when conditions are just right. This is the first flight for this particular type of research, allowing scientists to study how microgravity affects an astronaut's health risk to this type of infection.

With SpaceX's vehicle return capability, NASA and its international partners and other private, commercial and academic researchers are now able to get science samples needed to complete analyses back in a much timelier manner. This not only allows for more science experimentation on the orbiting laboratory, but also potentially quicker results that may lead to greater discoveries. There are some amazing activities going on aboard the space station.