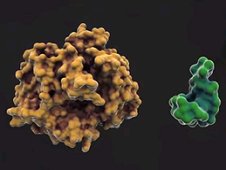 A detailed 3D structure of a protein crystal related to Duchenne muscular dystrophy (shown in orange) and an engineered inhibitor (shown in green) as a result of research done aboard the International Space Station. (CASIS)
View large image 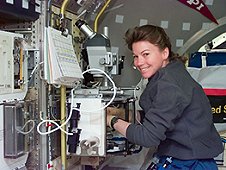 Astronaut Cady Coleman works with the Protein Crystal Growth Glovebox study in the U.S. Microgravity Laboratory 2 Spacelab science module. (NASA)
View large image When astronauts train for International Space Station operations, they do so under water to mimic the microgravity environment. And when astronauts do research in space, they can use that microgravity environment, in turn, to mimic the atmosphere inside of the human body. Though it may sound strange, the body's natural environment is very much like its own internal microgravity setting, as our cells naturally grow and operate together while suspended in bodily fluids.

The similarity between the body's natural environment and the microgravity environment makes the space station an ideal platform for life science investigations. To help facilitate U.S. National Laboratory opportunities aboard station, on June 26th the Center for the Advancement of Science in Space, or CASIS, launched its first solicitation for proposals. This request for proposals focuses on advancing protein crystal growth studies in microgravity.

"Our science team has identified the area of protein crystallization as a primary scientific pathway that may benefit greatly from the microgravity environment," said CASIS Interim Executive Director Jim Royston. "We are here to help researchers make groundbreaking, scientific discoveries on the ISS National Lab for the benefit of people on Earth."

CASIS is a nonprofit organization promoting and managing research done aboard the space station using the U.S. National Laboratory. Through this solicitation for proposals, CASIS aims to enable next generation research in the area of protein crystallization and life science breakthroughs. The current request for proposals calls for crystallography investigations -- studies using three-dimensional structures of protein molecules. CASIS will support research efforts via grant funding, facilitation of service provider partnerships and flight coordination to and from station.

When scientists grow protein crystal samples in space, they can form more perfectly. This gives researchers insight into the specimen's true structure, which may lead to a better understanding of its function and behavior. In laboratories on Earth, gravity can obscure or hide the full picture by essentially 'squishing' the crystals.

An example of a successful protein crystal growth investigation that was done on the space station relates to treatment of Duchenne muscular dystrophy. Japanese scientists crystallized a compound that included a protein responsible for the disease (H-PGDS) and its engineered inhibitor protein (HQL-79). This inhibitor is used treat Duchenne patients on Earth, because it hinders the activity of H-PGDS, slowing the progression of the disease. Researchers were able to identify a hidden water molecule in the samples grown on orbit. This led them to alter the inhibitor protein, making it more effective in treating Duchenne in the laboratory setting.

"CASIS has evaluated research performed to date in the life sciences and believes it is time to formally test the promising hypothesis that microgravity may produce greater internal order in protein crystal growth," said CASIS acting Chief Scientist Dr. Timothy Yeatman. "This could potentially lead to sharper resolution of crystals and their cognate proteins, which could produce more effective drugs for cancer and other debilitating human diseases."

Proposals are due using electronic submissions by 5pm (EST) on Aug. 15 via the CASIS solicitations webpage. CASIS also plans to release a series of solicitations in life, material and observational sciences.