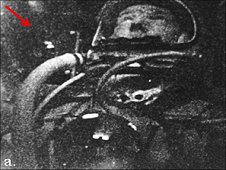 a. Astronaut Scott Carpenter during the 7th Mercury-Atlas flight. The first capillary fluids experiment in space is seen to the left of Carpenter’s head. (NASA)
View large image 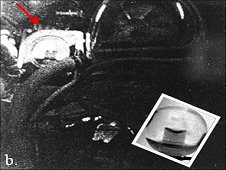 b. Lighting adjustments in the capsule enhanced experiment visualization. The inset shows a comparison of the predicted low-g interface configuration observed during drop tower experiments of a scale model. (NASA)
View large image 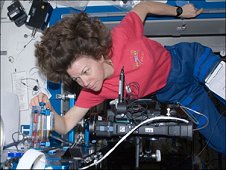 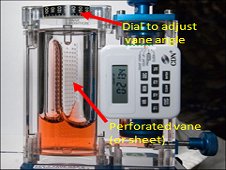 An image of the Vane Gap 2 (VG2) capillarity experiment performed on March 6, 2012. Another in the series of Capillary Flow Experiments-2, VG2 is investigating a condition where fluid "wicks" up the intersection of a perforated vane with the test chamber wall at certain "critical" angles. The stopwatch attached to the vessel is used to keep track of time elapsed during an individual test run. (NASA)
View large image The International Space Station's current studies on fluid physics in microgravity are leading to rapid advances in the field, and on May 24, these investigations are part of a noteworthy milestone.

A half a century ago, only four months after John Glenn's historic Friendship 7 flight , the first U.S. fluid physics space investigation took place aboard Aurora 7, the second orbital Mercury flight made by Scott Carpenter. This experiment addressed a critical question for human space flight. How do fluids behave without the presence of Earth's gravity?

Scientists wondered, would fluids break up into small droplets and disperse throughout the container in reduced gravity? Or would capillary forces prevail and spread the fluid across all of the container surfaces? Capillarity is the tendency of a liquid in contact with a surface to flow as a result of surface tension.

In addition, researchers questioned how spacecraft maneuvers such as attitude control or docking would impact the behavior and location of fluids? Even small disturbances in a low gravity environment might cause the fluids to move or shift their position. This could cause, for example, vapor to plug a pump covering a liquid outlet or lead to important liquid or fuel being leaked if the tank's vapor vent is covered with liquid.

The answers to these questions were needed to determine the location of propellants in rocket vehicle tanks, especially cryogenics like liquid hydrogen and liquid oxygen, as well as other liquids needed for life support, such as water.

"These were new questions to spacecraft engineers in the late 1950's," said Bob Green of the NASA's Glenn Research Center. "Prior to this, engineers depended on gravity to 'mask' these capillary effects and reliably position any liquid at the bottom of a container, such as fuel in an aircraft fuel tank or even in your car's gas tank."

Researchers from the NASA's Lewis Research Center, now known as NASA's Glenn Research Center, devised an experiment for Scott Carpenter to test the effects of capillarity and a piece of hardware to control the motion of the liquid in a tank, called a passive baffle.

The Mercury experiment used a simple cylinder, or standpipe, as a baffle inside a spherical container, which was partially filled with a liquid containing a green dye and a wetting agent. A video camera recorded the motion of the liquid.

"The liquid behaved just as the Lewis scientists predicted," said Bill Masica, an original investigator and former Chief of the NASA's Lewis’ Space Experiments Division. "In 1962, it certainly went a long way toward helping eliminate the mystery of how fluids would behave under weightless conditions."

The Mercury investigation was conceived with primarily liquid propellant management in mind, according to Mark Weislogel, Professor at Portland State University, and a principal investigator for fluid physics investigations currently aboard the International Space Station.

"Its successful demonstration added confidence to design engineers in the emerging field of large-length scale capillary flow aboard spacecraft," he said.

Over the ensuing 50 years, early investigations like the Mercury experiment led scientists to perform additional gravity-dependent fluid physics studies in space aboard sounding rockets, Apollo, Skylab, the shuttle, the Russian Space Station Mir, and the International Space Station. These experiments contributed to better understanding of the behavior of liquids in space under varying gravity conditions. Resulting data, detailing the behavior of liquids, led to design improvements for containers and transfer equipment to counteract the challenges triggered by microgravity, acceleration, and changes in direction.

Controlling the motion and flow of fluids is critical to the success of the mission, whether it is fuel, water, or other necessary fluids needed for the operation of the spacecraft or for life support. Results obtained from Weislogel's current series of Capillary Flow Investigations on the space station demonstrate that even slight adjustments to container shape allow the engineer to design equipment that exploits the properties of capillary flow for fluid management on the spacecraft. The shape of the container actually directs the fluids passively to where they are needed most, while preventing them from going where they are not wanted.

Investigations like the Capillary Flow Experiment, or CFE, continue on the space station, as researchers like Weislogel add to the collective knowledge of fluid physics under microgravity conditions.

"One thing I feel very good about is that most of my investigation results can apply in the real world right away," Weislogel said. "Our work has already led to design concepts to improve the performance and reliability of advanced systems, such as condensing heat exchangers and waste-water treatment devices." This data also has direct impacts to projects on the ground.

Many investigations are planned for the space station, and future work should yield important and exciting results. "It's quite remarkable that the physics of capillary flows was an important research topic in 1962 and is still an important topic in 2012," said Fred Kohl of the NASA's Glenn Research Center. "The research results, both then and now, can be directly applied to state-of the-art technologies for use on Earth and in low-gravity environments. Now that the ISS is fully assembled and devoted to utilization, much more time is available to carry out research investigations such as the capillary-flow series."