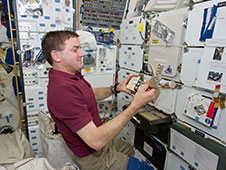 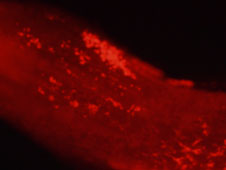 Image above: Under the microscope, the nitrogen-fixing bacteria can be seen attached to a root hair of the leguminous plant. A fluorescent protein was used to make the bacteria appear bright red when observed through a filter. Image credit: NASA/QinetiQ North America
View larger image

What can we learn from sending codependent bacteria and plants into space? Quite a bit, it would appear. An experiment with the tongue-twisting name Symbiotic Nodulation in a Reduced Gravity Environment, or SyNRGE for short, could yield benefits on Earth as well as space.

"We live in a world of microorganisms. Bacteria, archaea, viruses, and fungi are intimately associated with all life on Earth and travel with us as we explore space. They, like us, evolved in a world with gravity and like us, must adapt to living in environments where there is less gravity," says Dr. Michael Roberts, co-investigator on the project. "SyNRGE looks at how plants and bacteria that form a beneficial relationship on Earth interact in microgravity."

"The hope is that by increasing our understanding of this biological process in space, we can increase the efficiency of biological life support systems for long duration space missions by decreasing resupply costs of nitrogen, and possibly increase the productivity of crop plants on Earth," Roberts said. "Understanding these factors may enable innovative solutions to increase crop yields on Earth by reducing plant stress, limiting infection, and enhancing symbiosis."

The experiment, which was developed at the Space Life Sciences Laboratory at NASA's Kennedy Space Center in Florida, flew on the final mission of the Space Shuttle Program, as the STS-135 crew visited the International Space Station. Roberts, along with Dr. Gary Stutte, principal investigator for the project, both work at the lab as scientists under a contract with QinetiQ North America. In a cross-agency cooperative effort, they received help in preparing the experiment for flight from the U.S. Department of Agriculture.

"Dr. Carroll P. Vance, USDA researcher at the University of Minnesota, provided the host plant and strains of the bacterium that were used in developing the SyNRGE experiment," said Roberts. "Without the collaborative efforts of the USDA and NASA researchers, this experiment would not have been possible."

SyNRGE used a biological model system consisting of one species of plant and one species of bacteria that form a symbiotic relationship. During the STS-135 mission, astronauts worked with two different sets of experiments.

In one set of experiments, after reaching orbit the crew inoculated some of the five-day-old plants with beneficial bacteria while others were not. Before returning to Earth, a chemical fixative was added to preserve both the plants and the bacteria.

After returning to Earth, plants and bacteria grown on orbit and on the ground were placed in plant growth chambers to see if microgravity affected the ability of either bacteria or plants to form a symbiotic relationship.

Since the mission ended last summer, the team has had a chance to review the results and what it might mean for future space travel and improved agricultural techniques on Earth.

"The SyNRGE experiment verified techniques for seed germination and inoculation on orbit, and initial results suggest that the first steps in forming the symbiotic interaction leading to nitrogen fixation do occur in microgravity. The experiment also revealed significant differences in gene activation and expression between ground and space cultivated plants and bacteria. We are currently analyzing the gene expression data to identify the genes that may be involved in these differences," Roberts said. "We were very pleasantly surprised that the seed germination rate in the flight experiment was 100 percent."

Today, many types of research continue daily aboard the International Space Station, helping to provide scientific answers from microgravity that can enhance life on Earth as well as exploration of space.

"Research in space is valuable not only because of the unique environment of microgravity and its impact upon biological processes," adds Roberts, "but also because of its ability to inspire new discoveries, new science, new technologies, and new explorers." Cheryl L. Mansfield
NASA's John F. Kennedy Space Center
› Back To Top