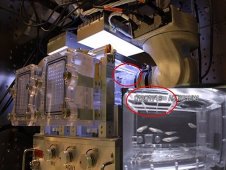 The Medaka Osteoclast investigation takes place inside the Aquatic Habitat aboard the International Space Station. The grid structure at the upper side of each Aquatic Habitat aquarium holds air, while preventing water from escaping. The air is injected with special syringe by the crew. (JAXA)
View large image 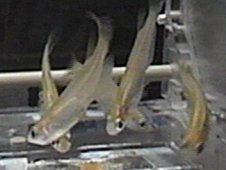 The above image shows an Aquatic Habitat specimen chamber housing Medaka fish as part of the Medaka Osteoclast investigation aboard the International Space Station. (JAXA)
View large image For centuries, people have gazed at the constellation Pisces and imagined starry fish swimming in space. Aboard the International Space Station, however, astronauts have a much closer view of real finned friends, thanks to the Medaka Osteoclast investigation. Sponsored by the Japan Aerospace Exploration Agency (JAXA), the study will help scientists uncover new knowledge about human bone health in space and on Earth.

Living in the Aquatic Habitat, the Medaka (Oryzias latipes) fish serve as a model for researching the impact of microgravity environments on osteoclasts -- the cells responsible for the process by which bone breaks down during remodeling. Bone is living tissue that naturally breaks down and rebuilds as part of the way the human body functions. This remodeling process allows for growth and healing as we age. When the remodeling is out of balance, diseases such as osteoporosis can occur.

Studies indicate osteoclasts are the culprits for the noted decrease in bone density experienced by astronauts while on orbit. "The phenomenon is considered due to the disruption of balance between the amount of newly formed bone and the amount of bone absorbed into the blood," said Nobuyoshi Fujimoto, associate senior engineer at JAXA's Space Environment Unitization Center. "Activation of the osteoclast is assumed to cause the decrease of bone mineral density in space; however the basic mechanism is still unknown."

Researchers selected the Medaka for many reasons. First, they are vertebrates, meaning they have bones and muscles. Research to understand the basic mechanisms of how osteoclasts work in microgravity for the fish may be helpful in understanding human bone change findings.

The fish also are transparent, allowing scientists to view the inner workings of their bodies while they swim in space. The Medaka have a fully mapped genome, too, making it possible for scientists to identify changes in their genetic code from exposure to the space environment. The fish have established transgenic lines -- modified DNA that passes down to their offspring -- which adds to their usefulness in experiments.

Researchers also are interested in the animals' gravity sensing system. The fish understand "up" while living aboard station thanks to their instinctual dorsal light response. In other words, they sense the LED light at the top of the habitat in the same way they would sense the sun's light while in water on Earth.

Even though fish seem weightless when they swim in water on Earth, they still are impacted by gravity and buoyancy. While they appear to float in both settings, scientists anticipate behavioral changes due to microgravity.

"The investigators' hypothesis on gravitational effects is that the balance between the internal air bladder of the fish and other high density organs (e.g., head, teeth) will change in microgravity; tensions on the bone will also change and we can observe different responses in space than on Earth," said Fujimoto.

The Medaka study began October 26, 2012, and continued through Dec. 24, for a total duration of 60 days in orbit. The chemically preserved fish will return to Earth for post-flight analysis, but researchers already are learning plenty from video observations downlinked to the ground. You can view the first fish feeding in this video and subsequent dining sessions at 8 days and 13 days in space. If you want to see how the Medaka reacted after being transferred to the space station habitat, watch here.

The investigation will determine if osteoclasts change during these orbital studies. Currently astronauts try to counteract the loss of bone density via 2-hour high-intensity resistive daily exercise routines, nutrition and vitamin D supplements. Preventing the bone loss without exercise, however, could free up crew time while improving health. The researchers believe basic research studies with these fish could ultimately benefit astronauts, osteoporosis patients and people with reduced mobility here on Earth.

"By studying the osteoclasts of Medaka in microgravity, it may be possible to discover a novel mechanism," said Fujimoto. "The results may contribute to the development of a new treatment useful for human health, such as curing osteoporosis."

Future studies may include looking at Zebrafish (Danio rerio) to examine muscle health and subsequent Medaka experiments to look at stress responses via video observation. There even are plans to breed fish in orbit for multigenerational studies, since the Medaka hatch-to-spawn cycle is about 45 days. This would mean the first "nursery schools" in space!