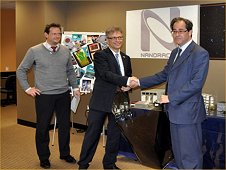 During a ceremony on Feb. 14, 2012, at the Astrium North America facility in Houston, two principal participants shake hands as a gravitational research centrifuge gets handed over by Astrium ST to NanoRacks LLC representatives. The handshake of Ulrich Kuebler (second right) of Astrium ST and Jeff Manber, managing director of NanoRacks, symbolizes the working relationship between Astrium ST and NanoRacks, who are working in cooperation with NASA, to deliver the commercial centrifuge facility to the International Space Station. At left is Achim Schwarzwaelder of Astrium ST. (NASA)
View large image 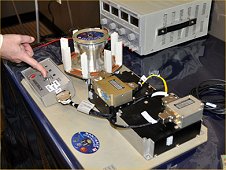 This is a medium close-up view of a gravitational research centrifuge which Astrium Space Transportation handed over to NanoRacks LLC, during a ceremony on Feb. 14 at Astrium North America’s Houston facility. Astrium ST and NanoRacks are working in cooperation with NASA to deliver the commercial centrifuge facility to the International Space Station. (NASA)
View large image NASA is expanding its existing capabilities for doing plant and animal tissue investigations on the International Space Station with the delivery of a new centrifuge scheduled for this summer. The centrifuge is a NASA and commercial industry collaboration, and will be housed in the NanoRacks facility.

The small Gravitational Biology Lab will allow biological experimentation in artificial gravity -- from zero gravity to twice Earth’s normal gravity -- for prolonged periods of time. The new facility will provide environmental control, lighting, data transfer, commanding, and observation of experiments in Mars and moon gravity conditions, as well as mimicking Earth's gravity. This is useful for biological research, and could lead to advances in medications and vaccines, agricultural controls, and discoveries in genetics -- all beneficial to those of us on Earth.

NanoRacks hardware is available for many different investigation scenarios, including mini-aquariums, seed germination boxes, plant growth chambers, mammal and plant cell culture units, along with multi-generation chambers for fruit flies. There have been several multi-generational investigations involving drosophila -- a type of fruit fly. Drosophila has a similar genetic makeup to humans, and can serve as a genetic model for several human disease studies.

There are already two NanoRacks research platforms in use on the space station, including two microscopes. More than 35 investigations have already used the NanoRacks facilities, which operate under a Space Act Agreement with NASA and the U.S. National Lab. In 2005, Congress designated the space station a national laboratory in an effort to include other government organizations, schools and universities and private companies in the use of the orbiting lab facility, increasing the amount of research being done in microgravity.

The centrifuge is a joint venture between Astrium Space Transportation and NanoRacks LLC, with more joint projects planned. Additional facilities also are planned, with a Plate Reader scheduled for delivery this year to allow on-site microbiological analysis, expanding life science and biological research.

"This is an important step in the expansion of National Lab facilities aboard the space station," said Marybeth Edeen, former U.S. National Lab manager at NASA's Johnson Space Center. "Having companies develop research and facilities for the National Lab with their own funding demonstrates the beginnings of the commercial space marketplace that the National Lab was created to serve."

Centrifuges have been used in space since 1985 to conduct more than 130 experiments on 25 shuttle missions, resulting in the publication of more than 300 scientific papers. This heritage provides a large variety of flight-proven experiment designs now available for use by researchers for all types of molecular and cellular investigations on animal and plant tissues. The new NanoRacks facility design will provide fully automated culturing of cells and tissue, including "plug-and-play" payloads that require only a standard computer USB connection to access needed power and environmental controls.

Station crew members and researchers are looking forward to the addition of this new centrifuge. What they will learn from the research in the new facility can be used to better life on Earth, as well as provide knowledge to help advance future long-duration human spaceflight missions.