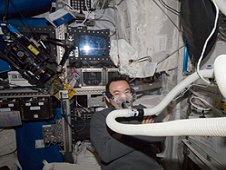 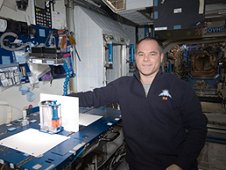 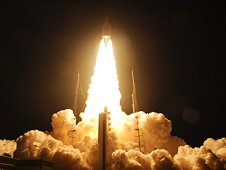 On Wednesday 5 June 2013, Ariane 5 VA213 lifted off from Europe's Spaceport in French Guiana with ESA's fourth Automated Transfer Vehicle, Albert Einstein, en route to the International Space Station. (ESA/S. Corvaja)
View large image You may be surprised to hear it, but Albert Einstein is headed toward the International Space Station to deliver a ton of research. When can the crew expect their guest? June 15.

Although Einstein probably would have loved to work in a space laboratory that has an instrument studying dark matter, it is not the scientific genius who will be stopping by; rather, it is the European Space Agency's unmanned Automated Transfer Vehicle (ATV) 4, which was named in honor of the 20th century theoretical physicist and icon of modern science. Science is the main reason for the visit, and that would likely have pleased the influential scientist.

An Ariane-5 rocket launched June 5 from Guiana Space Center near Kourou in French Guiana, sending the ATV-4 to the space station loaded with  about        1,049 pounds (476 kilograms) of supplies, including equipment to keep science happening in the orbiting laboratory.

"ATV-4 is vital to the science operations aboard the station because the work and activities the crew will perform vary with each mission," said Jorge Sotomayor, lead increment scientist for Expedition 35/36. "ATV's role in the International Space Station Research Program is to serve as a resupply spacecraft for station research. In that way, the resupply vessels open the door for more investigations to be conducted than ever before, helping us make amazing discoveries through station research."

The objective of the Biological Rhythms 48 hours study is to examine the accurate circadian variation of cardiac autonomic function by spaceflight. Other functions affected by the autonomic nervous system include digestion, respiratory rate and perspiration.

Crew members will wear an Actiwatch for 96 hours and an electrocardiograph for 48 hours. Monitoring autonomous cardio functions is important for improving crew health technology during long-duration spaceflight. Crew healthcare technology for the biological rhythm disruption provides the public with tips to promote a healthy lifestyle.

The Energy study measures changes in energy balance in crew members following long-term spaceflight. It also measures adaptations in the components of total energy expenditure, helping researchers derive an equation to determine the energy requirements of crew members during spaceflight. This knowledge ensures health, good performance and the overall success of a mission by helping planners determine the proper amount of exercise and food that each crew member needs to be healthy and productive. Scientists also use these techniques to assess energy expenditure of people on Earth.

The suite of fluid physics experiments known as CFE-2 study how fluids move "up" surfaces in microgravity. Results from prior experiments already have improved current computer models of low-gravity fluid systems. Spacecraft designers have incorporated information from the models to improve fluid transfer systems on future spacecraft. The experiment also has applications for medical testing.

"What we are learning from the capillary flow experiments is being applied to lab-on-a-chip technology used to evaluate blood samples to detect HIV, hepatitis and other spreadable diseases," said Sotomayor.

Lab-on-a-chip technology integrates one or several laboratory functions on a small single chip.

CVB investigates the physics of evaporation and condensation, and how these physical properties affect cooling processes in microgravity using a remotely controlled microscope and a cooling device. Certain cooling devices, known as wickless heat pipes, contain no moving parts and are really reliable in space where getting replacement parts is difficult. The results from these experiments could help with the development of more efficient cooling systems in microelectronics on Earth and in space.

Another investigation that looks at cooling systems suitable for efficient space operations is the DECLIC-HTI-R, which studies liquids just beyond the verge of boiling. The way heated liquids flow during boiling is different in space than on Earth. The study attempts to observe and understand the phenomena associated with salt precipitate formation; agglomeration; and transport in water at very high pressures where liquids and vapors no longer co-exist, known as supercritical fluid.

"This investigation is important to address one of the largest technological barriers, salt deposition and corrosion," said Sotomayor. "Salts deposited in current cooling systems cause corrosion that limits application of supercritical water oxidation in waste management and resource reclamation systems. These systems are critical for life support systems needed for long-term spaceflight."

Dynamic Surf examines Marangoni convection, a flow driven by the presence of surface tension gradient as produced by a temperature difference at the liquid/gas interface. By understanding how these fluids move, scientists can learn how heat is transmitted in microgravity, and ultimately drive the design and development of more efficient fluid flow-based systems and devices.

The knowledge from the Marangoni space experiment is applicable to the high-performance heat exchanger and heat pipe in space and on Earth. Designing more efficient, lightweight radiators that remove unwanted heat from spacecraft is critical for long-duration space missions.

With all these cool studies going on above our heads, if Einstein were alive today, his hair probably would be standing -- wilder and higher in amazement. He would likely be fascinated by these influential studies going on in a place where his theories have been and continue to be tested in the name of discovery.