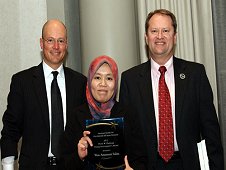 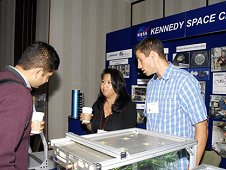 Exhibitors from NASA's Kennedy Space Center in Florida display test models of biological research equipment for the space station. (ASGSR/Janet Powers)
View large image Research in space with everything from microbes to humans and from super-cold atoms to weightless flames was covered by the first national conference for the new American Society for Gravitational and Space Research (ASGSR), held from Nov. 28 to Dec. 1, 2012, in New Orleans. Scientists, engineers and students shared research, findings and -- most importantly -- questions about how space changes things.

ASGSR was established in 1984 as the American Society for Gravitational and Space Biology. Changing the name from "Biology" to "Research" reflects a broadening of the society's scope to include physical sciences. Space research uses the unique conditions of space -- mainly the apparent lack of gravity, also called microgravity -- as a laboratory to understand how matter and energy interact. The Space Age gave scientists the opportunity to dial one last physical parameter, gravity's effects, nearly to zero aboard Skylab, the space shuttle and now the International Space Station.

The change mirrors a growing trend across the sciences: life itself is an extension of physics. The same molecular force that makes liquid rise in straws -- capillarity -- and the turbulence in fluid lines can be found in blood flowing in arteries or ammonia in cooling systems. Signals that cells should misbehave on the ground or in space come from triggers we have not yet found. We still are learning the right questions to ask about how life and physics overlap.

The conference opened with a plenary overview of research by Waleed Abdalati, then-NASA Chief Scientist; Jeff Bingham, senior adviser on space and aeronautics for the U.S. Senate Committee on Commerce, Science and Transportation; Christer Fuglesang, head of the International Space Station's science and applications at the European Space Technology Centre; Julie Robinson, International Space Station program scientist; Tim Yeatman, chief scientific officer at the Center for Advancement of Science in Space; and Marshall Porterfield, chief of the Space Life and Physical Sciences Research and Applications division at NASA Headquarters in Washington.

The stage was set by the lead symposium addressing the convergence between life and physical sciences in microgravity research. Other symposia discussed turning laboratory research into clinical countermeasures to protect astronaut health, especially bones, as well as the potential applications to people on Earth.

The emerging interdisciplinary viewpoint was reflected by one afternoon's sessions, focusing on the convergence of life and physical sciences in topics ranging from robotic bees to advanced sensors for life sciences research.

Workshops were held on utilizing the space station's national laboratory segment for life and physical sciences, easing the way for payloads that need microgravity, technologies for biological space exploration, a light microscopy module for physical and biological sciences, and the capabilities and opportunities of the space station European Modular Cultivation System.

With an eye to the future, one session focused on best practices in education and outreach for gravitation research. The entire space community recognizes that space research itself is a journey that depends on incubating bright, young minds and telling the public why the effort is important. Discussions covered undergraduate student experiments aboard the space station and NASA outreach on the ground.

"Educational outreach sessions at these conferences always spark the most passionate discussions and innovative collaborations as the desire to reach out and inspire students spans across all disciplines," said Chesley Chapman of the International Space Station Program Science Office.

More than 30 student posters addressed a range of questions. How does blue light help red light in the growth of mustard plants (Arabadopsis thaliana)? How do genes in the neck muscles of mice respond to microgravity and hypergravity -- a gravitational force greater than Earth’s 1g—or the embryos of Xenopus frogs in hypergravity? What are the contact angle and surface tension of a new green propellant?

Technical sessions went to the nuts and bolts of what happens in space. Fluids boil differently when convection cannot carry away hot material and bring in cold or may literally climb the walls when molecular forces are not overruled by gravity. Combustion is a different challenge. As with boiling fluids, convection is absent. Cool flames can be an almost undetectable danger, yet they also illuminate the physics at work in combustion. At the opposite end from fire, the space station soon will host "the coldest spot in the universe," a facility where lasers super-cool atoms. Since their container is falling with them in orbit, they can be studied for extended periods without hitting bottom.

The life sciences also offered new challenges. As on Earth, there is a strong drive to develop non-invasive diagnostic techniques, ways to sample or measure without going inside the patient. New methods of measuring blood sugar during bed rest were discussed, along with how to measure fluid pressures inside the brain without actually getting inside someone's head.

An example of how the two fields are merging was the selection of Amani Wan Salim of Purdue University to receive the Thora Halstead Young Investigator award for her work on the Cell-Electrophysiology Lab-on-a-chip, an interdisciplinary project joining biology and fluid physics.

With this aspect of the space journey just beginning, more results -- and questions -- are expected at the next conference, Nov. 3–8, 2013, in Orlando, Fla.