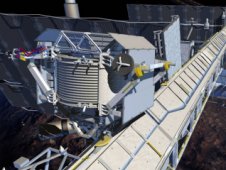 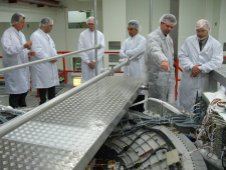 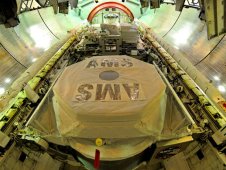 AMS-02 Ready for Launch in Endeavour’s Payload Bay, April 2011. (AMS Collaboration)
View large image The Alpha Magnetic Spectrometer, or AMS, was carried into orbit on STS-134 on a mission to the International Space Station. While it may sound like just another instrument, in actuality it is the largest scientific collaboration to use the laboratory! This investigation is sponsored by the United States Department of Energy and made possible by funding from 16 different nations. Led by Nobel Laureate Professor Samuel Ting, more than 600 physicists from around the globe will be able to participate in the data generated from this particle physics detector.

The mission, to seek out answers to the mysteries of antimatter, dark matter, and cosmic ray propagation in the universe, is only part of the story. To fully understand where the science is going, you have to look at where it came from. NASA efforts with AMS began in 1994, when NASA's Johnson Space Center in Houston, Texas, conducted a feasibility study to see if such a delicate instrument could even fly in space and still produce usable data.

Ken Bollweg, AMS deputy project manager for NASA, mentions the challenges that needed to be overcome for the hazardous environment of space. "The detectors used in these types of experiments are typically used in an underground environment where the temperature doesn’t change more than two degrees from winter to summer and the bedrock hasn't moved in millennia," comments Bollweg. "Reviews of the detectors and their operating requirements indicated that it would be very challenging to adapt this technology to space -- but possible nonetheless."

Work on AMS integration and interface hardware began in earnest upon approval in 1995. One of the first understandings NASA needed to reach with the AMS Collaboration was the limitations of mass, size and power. For instance, the AMS Collaboration considered the AMS permanent magnet lightweight at approximately 2 tons, given that similar electromagnets on Earth weigh about 10,000 tons.

Working together, NASA and the AMS Collaboration developed a two-part plan to enable the mass requirements. The Unique Support Structure or USS-01 completed in 1997 and was launched with STS-91 in June of 1998. It carried a 9,197 lb engineering evaluation version of AMS. With the successful STS-91 mission and some extra time, since it was clear that the station would not be ready to host AMS in 2001, the scientists decided to make a few improvements. Plans for the AMS grew to be more complex, including the upgrade to a more powerful cryogenic superconducting superfluid helium-cooled magnet. These changes increased the projected weight for AMS to 15,251 lb, making it necessary to test a second support structure, called USS-02.

Determining a way to communicate the data from AMS to the ground was another important element of the undertaking. A digital data recorder system was developed and used during the STS-91 mission to capture data for the AMS Collaboration. Even though this was a preliminary effort to the overall AMS goal, the resulting data led to improved measurement sensitivity.

Several years passed as engineers continued working on procedures, certification requirements, and entered into the testing phases of development. In December 2001 NASA flew a prototype synchrotron radiation detector with STS-108. This flight test clarified performance of the detector for the AMS. The enhanced complexity of the AMS also meant an increase in data channels from close to 70,000 to over 300,000. In response, NASA developed a new digital data recorder system, which launched on STS-133 in February 2011. This enabled a trial run of the recorder system in preparation for the actual launch of AMS with STS-134.

With the announcement that the space station would continue to operate through 2020, the AMS Collaboration swapped out the current cryogenic magnet with a permanent magnet, which would have an infinite life. The entire AMS was taken apart, the magnets exchanged, and put back together for testing. From concept to implementation, this only took seven months to extend the potential life of the AMS investigation.

Martin commends the efforts of the many NASA and contractor personnel who made significant contributions to the completion of the AMS investigation. These individuals will continue to support AMS while it is on its mission in orbit to gather valuable data. Martin notes in particular the support of NASA's Bill Gerstenmaier, associate administrator for space operations. "[He was] critical to AMS's success, especially while AMS was off the space shuttle and space station manifests after the Columbia accident," says Martin. "He saw to it that Advanced Projects Office personnel were able to continue with the integration and certification tasks and personally visited AMS at various stages of development and testing."

The AMS will be the most advanced charge particle detector flown in space, increasing global knowledge of antimatter and dark matter and providing a powerful tool to physicists. The investigation will enable the discipline of modern physics to grow as scientists seek answers to the origins of our universe.