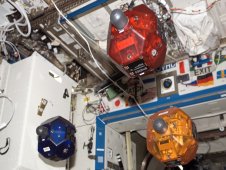 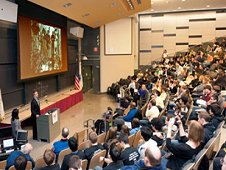 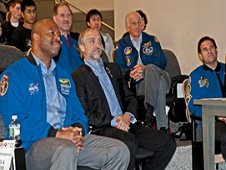 Current and former astronauts on hand for the third annual Zero Robotics SPHERES Challenge competition included, from left, Leland Melvin; John Grunsfeld; Richard Garriott, who traveled to the space station aboard a Russian Soyuz capsule; Jeff Hoffman; and Greg Chamitoff. The astronauts shared their space experiences with the student audience. (MIT/Litant)
View large image
In high school, there are champions of football and basketball and even music, but not many students can say they are champs on the International Space Station -- but Alliance Rocket students from the United States and virtual participants Alliance CyberAvo, representing schools in Germany and Italy, have now earned that distinction.

Both teams were named the winners in the third annual NASA-sponsored Zero Robotics SPHERES Challenge competition for high school students from the United States and abroad.

NASA, the Defense Advanced Research Projects Agency and the Massachusetts Institute of Technology in Cambridge sponsored the competition, which challenged students to write software code for small satellite robots on the station.

"This competition helps to build critical engineering skills for students, such as problem solving and teamwork, and helps us to find future scientists and engineers to work in space," said Leland Melvin, NASA associate administrator for education at NASA Headquarters in Washington. "The teams this year did not disappoint. The students were exceptional with their designs and flight programs."

Last fall, qualifying and semifinal tournaments were run by computer simulation at the Massachusetts Institute of Technology. On Jan. 23, the finals were played 240 miles above the Earth aboard the station using robotic, bowling-ball-sized satellites called SPHERES, or Synchronized Position Hold, Engage, Reorient, Experimental Satellites. SPHERES are used inside the space station to test autonomous rendezvous and docking maneuvers. The free-flying satellites are self-contained with power, propulsion, computers and navigation equipment.

For this competition, NASA uploaded student-developed software to the SPHERES, including code written by the top 36 teams from the Fall 2011 competition. Astronauts Don Pettit and Andre Kuipers, who currently live and work aboard the station as part of Expedition 30, presided over the event and gathered data from the student-controlled SPHERES flight programs after each phase of the competition. During a simulated mission, the teams completed a special challenge inspired by future satellite technologies, such as formation flight and close proximity operations. Student finalists were able to watch their flight program live on NASA-TV.

The winners were awarded certificates and a SPHERES flight patch that previously had been flown to the space station.