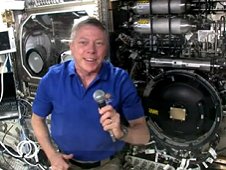 Expedition 29 Commander Mike Fossum encouraged students to participate in the YouTube Space Lab contest via a broadcast from aboard the International Space Station. (NASA)
View large image "Your experiment, 250 miles above Earth, for the whole world to see." That is the promise made at the end of the video on the official YouTube Space Lab contest Website. NASA has partnered with Space Adventures to support this competition. Space Adventures is collaborating with YouTube and Lenovo. Armed with initiative and imagination, students have the chance to envision and design their own experiment with the ultimate prize -- flying it on the International Space Station.

The contest opened on Oct. 11, 2011, and will continue to accept submissions in the form of a two-minute duration video through Dec. 7. Students age 14 to 18 can become researchers in their own right by proposing up to three separate original entries on the official YouTube Space Lab contest Website. Participants can enter as either individuals or in teams of up to three people. Entries must include an experiment question, hypothesis, method and expected results.

Part of the appeal of the contest is the prestigious panel of judges that are lined up to select the finalists, including professor Stephen Hawking, NASA's Leland Melvin, ESA astronaut Samantha Cristoforetti, JAXA astronaut Koichi Wakata and Cirque du Soleil founder Guy Laliberte, among others. The final selection includes a public vote which will begin via YouTube on Jan. 3, 2012.

"The space station really is the greatest science classroom we have," said Leland Melvin, associate administrator for education at NASA Headquarters in Washington and YouTube Space Lab judge. "This contest will capitalize on students' excitement for space exploration while engaging them in real-life scientific research and experimentation."

As an award, six regional finalists will get to travel to Washington, D.C., to participate in a zero-g flight. On March 13, two global winners will be announced. The global finalists will get to travel to either Russia, where they can engage in an authentic astronaut training experience, or Japan to watch their experiment blast off into space. They also receive the grand prize of having their experiments performed on the space station and live streamed for the public via YouTube.

This competition aims to inspire students to look beyond their daily studies and ask their own questions of the universe around them. Proposed experiments will focus on either life sciences or physics with the hope that the entrants will take their experiences with them as they continue in their education, perhaps towards careers in math and science. NASA astronaut Mike Fossum encouraged students to participate from aboard the space station via his own YouTube video.

"YouTube Space Lab is a once-in-a-lifetime opportunity for you to have your experiment performed by astronauts like me in the space station," said Fossum. "Imagine, you become the scientist! Your experiment is performed in space and streamed back to Earth. The world watches as your scientific investigation unfolds. What will you do from onboard the International Space Station?"

The official YouTube Space Lab Website asks some initial prompting questions, such as can plants survive beyond the Earth and whether or not proteins grown in space could reveal the mysteries of life. The real thrill, however, is the unlimited potential opened up in the minds of students as they begin to ask their own questions and seek real answers. With previous student experiments in space having already led to new knowledge, there is no boundary to what exciting possibilities this latest opportunity to probe young minds may create.