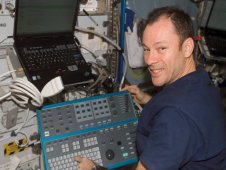 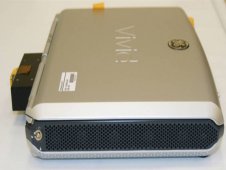 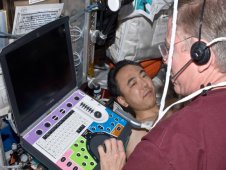 Expedition 29 Commander Mike Fossum scans JAXA crew member Satoshi Furukawa using the Ultrasound 2 on the International Space Station. The controller is approximately the size of a laptop computer. (NASA)
View large image Every year there are strides made in medical technology that improve research capabilities and the quality of care for patients. The decade-old ultrasound on the International Space Station, for instance, yielded benefits and inspired advances both in space and for people here on Earth during its tenure. With its replacement this year, however, ultrasound research in microgravity will get a boost. The next-generation Ultrasound 2, which launched with STS-135, is a smaller, more capable piece of equipment, which ironically replaced the older ultrasound just as it stopped functioning on orbit.

According to Joe Gensler, chief engineer for flight systems implementation for Ultrasound 2, the sophisticated features provided by the new equipment make the updated machine a welcome change. "The ultrasound device can run self-diagnostics, it can tell you what features are having problems or what probes need to be adjusted. It's a device with more capability than I've ever seen, it's quite amazing."said Gensler.

Based on the General Electric, or GE Healthcare Vivid q ultrasound, the Ultrasound 2 is actually a commercial off-the-shelf piece of hardware that was updated to meet station standards for flight. The unit works in conjunction with the Human Research Facility, or HRF, video power converter to provide real-time ultrasound video downlink, which enables the ground to remotely guide the crew.

Some of the advances this smaller, portable equipment provides include enhanced color, 2-D and Doppler imaging, as well as smart-depth capabilities and panoramic scanning. With dramatically improved resolution, this tool can ensure more accurate measurements while in use for space station research and healthcare.

With so much capability, however, there is a need to instruct the crew on the many different features of the ultrasound. Taking the time to do so was complicated by the failure of the previous ultrasound, which artificially sped up the new device training and delivery. "It has so much capability that it takes a trained specialist to operate it," said Gensler. "So what we decided was that we needed to have step-by-step instructions to walk the crew through how to use the device and all of its features."

The Ultrasound 2 was developed by and belongs to the Human Research Program, or HRP, and resides in the HRF-1 racks in the Columbus module of the space station. The Ultrasound 2 also has the advantage of mobility over its permanently-mounted predecessor. If necessary, the device can operate in any of the station modules, at least for the half-hour duration of its rechargeable battery life.

The first use of the Ultrasound 2 equipment was successfully executed on August 23, 2011. A crew member was remotely guided through detailed procedures, assisted by verbal directions from the ground as he scanned the heart of a fellow astronaut. The scans took place before and after a short exercise session aboard the space station. In September, the crew is scheduled to scan the leg muscles.

Investigations that will use the Ultrasound 2 include Integrated Cardiovascular and Integrated Resistance and Aerobic Training Study, or Sprint, as well as Vessel Imaging. Future studies will also make use of this new equipment, as it will continue to reside on the space station for the life of the orbiting laboratory, currently planned to operate through 2020.

Field medical offices with limited resources on the ground can take advantage of lessons learned from the processes used to train astronauts on this complicated machine. While use of the ultrasound aboard the space station can help improve procedures for uses of the device in remote regions on Earth, it is also a key tool for preparing humans for long-duration exploration. "If we are seriously going to explore deep space, we have to understand the effects of long-term zero gravity and radiation on the body," said Gensler. "Ultrasound helps tremendously by giving us insight into the mechanics of what's going on inside the human body."