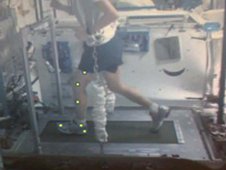 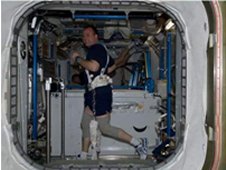 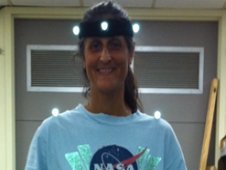 Space station astronaut Sunita Williams participates in a baseline data collection session for the Treadmill Kinematics experiment. (NASA)
View large image While many of us may not like to exercise, imagine having to do it two hours every day. Astronauts on the International Space Station must exercise at least that much to stay fit. A new space station experiment is studying the difference between exercising on a treadmill in space and on Earth.

Biomechanical Analysis of Treadmill Exercise on the International Space Station, or Treadmill Kinematics, is the first rigorous investigation to determine the most beneficial treadmill exercise conditions to maintain or improve crew health during long-duration spaceflight.

"Exercise activities are developed under the assumption that walking and running in microgravity have the same training effects as under normal gravity," said John De Witt, principal investigator for the experiment with Wyle Integrated Science and Engineering Group in Houston. "However, if there is a difference, we will learn more about the effects, allowing us to develop appropriate exercise prescriptions to increase benefits to crew health and well-being."

Researchers are gathering video and data on the force the body exerts when the foot hits the ground while crew members run and walk on a treadmill at varying weights and speeds. This will determine joint motions and muscle functions that occur during normal exercise. Researchers also are comparing in-flight running styles with running styles on Earth.

"On the space station, locomotion -- running and walking movement -- occurs on a treadmill that isolates vibrations, which increases the potential for training differences in space," said De Witt. "The overall goal of the advanced exercise regimes for the crew members is to increase weight at the joints to provide a greater stimulus for bone and muscle health."

An earlier study on the space station titled Foot Reaction Forces During Space Flight, or Foot, measured foot forces on the previous version of the treadmill. "They weren’t enough to maintain bone," said Julie Robinson, International Space Station Program scientist at Johnson Space Center in Houston. "Now we have a better treadmill, a better harness and improved protocols. They will help us determine how to arrive at future exploration destinations strong and ready to explore the surface."

While results of the Treadmill Kinematics analysis will be used to determine the best treadmill conditions for maintaining health during spaceflight, the data gathered may provide researchers with a better understanding of how exercise speed and external loads affect forces experienced by the joints and muscles on Earth.