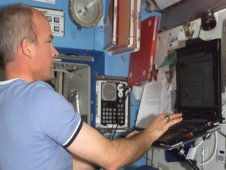 Crew members participating in the Journals investigation use laptops aboard the International Space Station to make entries of their thoughts. (NASA)
View large image 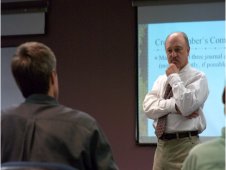 Principal Investigator Jack Stuster, Ph.D., presents the Journals investigation overview training in the Flight Operations Facility at NASA's Johnson Space Center. (NASA)
View large image
They likely don't make a notation of the star date or call it a captain's log, but astronauts aboard the International Space Station, like many other voyagers, keep journals during their journeys. The crew writings, however, are more than just an exercise in maintaining a diary of daily thoughts and events. By looking at their entries, researchers can gain insights into the mental and emotional states that accompany life aboard the space station.

The study is called the Behavioral Issues Associated with Isolation and Confinement: Review and Analysis of Astronaut Journals, or Journals. Jack Stuster, principal investigator, was inspired by previous human expeditions when designing his research concerning the future of space travel. He reviewed the logs and journals of polar explorers and diaries from occupants at remote duty stations on islands in the South Indian Ocean and in Antarctica, publishing those results in "Bold Endeavors: Lessons from Polar and Space Exploration" and "In the Wake of the Astrolabe."

According to Stuster, looking at the past helped him to plan an investigation for the future. "An analog approach is used in all of the sciences when access to actual conditions is constrained or impossible," said Stuster. "I employed the method to derive lessons from the experiences of previous explorers that might be relevant to the future explorers of Mars."

Analyzing the journals of astronauts was the next logical step for Stuster, and the published results provided valuable quantitative psychological insights. "Studying small groups living and working in isolation and confinement is much like studying social issues with a microscope. There is much that can be learned from the approach that is relevant to nearly all human experience," said Stuster.

The study also was a helpful exercise for the crew, as keeping a written account helped to capture memories, expound on experiences, and even provided an outlet for stress. The cathartic aspect of writing one's thoughts is seen in this astronaut journal excerpt: "With time on my hands for half an hour, I feel slightly melancholy, for some reason. This happens quite often in space, among astronauts in general (and cosmonauts), and space seems to somehow amplify our emotions, positive or negative, however they might be. Maybe it is the remoteness, or the beautiful scene outside, or a consciousness that we are in a unique situation, benefiting from the work of others."

To obtain data for this study, researchers asked 10 crew members to write journal entries during their expeditions aboard the space station. The crew used a laptop and template to write at least three times a week while on orbit, downloading to the principal investigator once a month for analysis. The average duration of time on the space station for participants was 188 days, during which astronauts composed a grand total of 4,247 separate entries.

Based on crew writings, the investigation identified 24 major categories with behavioral implications. Of these, there were 10 in particular that accounted for 88 percent of the text in the journal entries. These specific focus areas included: work, outside communications, adjustment, group interaction, recreation/leisure, equipment, events, organization/management, sleep and food. A second-level analysis pinpointed an additional 108 subcategories. The third level of analysis gauged morale and any precise problem areas by looking at tone and using a "net positivity/negativity metric," which was calculated by subtracting negative text excerpts from positive ones.

The thoughts and experiences contained in the writings remained anonymous; only the individual keeping the journal and the investigator had access to the documents. The study included both men and women from across the various specialties, such as scientists, engineers, pilots, military members and civilians.

"The astronauts wrote candidly and insightfully about their experiences with the hope that their journals would be used to improve conditions for subsequent station crews and the crews of future space expeditions," said Stuster. "All participants in the study reported that their journals served as outlets for frustration that, if expressed directly, could damage relationships."

In one particular entry, a participant in the study detailed how keeping a journal helped them to maintain perspective on their work and relationships with others. The astronaut wrote: "I realize that often times I use this journal to vent my frustrations. This helps me collect my composure to deal with the situations. I must continue to look at the big picture and count myself lucky to be here."

The journals also provided an opportunity for the crew to capture moments of happiness and job satisfaction. One astronaut wrote: "I have been in a good mood today. Probably lots of work makes me feel accomplished and a good workout makes me a little tired. I am ready to eat dinner and call it a night."

While living and working aboard the space station was less difficult than anticipated, astronauts reported that conditions still fell short for optimum human performance over sustained periods. This finding was evident in the content of some entries, which contained a tone of frustration and annoyance, though there were many positive statements regarding living and working in space.

A follow-up study began in late 2011 to identify any effects of the altered environment aboard the space station. Changes since the previous investigation, which took place with two and three-person crews, include new equipment, updated operations, increased population, and the completion of the station. "The doubling of crew size, in particular, has altered the conditions aboard the space station since most of the original journals were written," said Stuster. "The current Journals study is an extension of the previous work and seeks to refine our understanding of the factors that contribute to successful adaptation and performance during long-duration space exploration."

The topic of a more populated station was on the minds of the crew, as well, and appeared in some journals. One astronaut wrote: "Suddenly I'm really appreciating the solitude that I have here. It does help to have control of your own environment if you’re going to be isolated. I’m trying to picture what it would be like up here with a crew of six. It would be totally, completely, absolutely different."

The Journals investigation addresses risks identified by NASA's Human Research Program Integrated Research Plan, however the benefits of these findings are not constrained to the space environment. For instance, shift workers and astronauts both face performance errors due to sleep loss, circadian desynchronization, fatigue and work overload. Groups, whether in corporate offices, schools or isolated research locations have similar goals to address team cohesion, performance and training, to name just a few focus areas. Behavioral and psychiatric findings from this study can apply across many vocations, carrying the potential to improve lives here on Earth