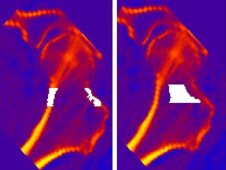 One mm thick sections through the mid frontal plane of the hip, showing regions of evaluation in white superimposed on a false color image of the quantitative computed tomography data. The left hand image shows the cortical region of the femoral neck and the right hand image shows the trabecular bone regions. (NASA)
View large image 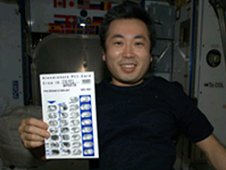 Astronaut Wakata displays a bisphosphonate distribution card while aboard the International Space Station. (NASA)
View large image We learn as kids that taking vitamins and exercising helps us to build strong bones and promotes health. To maintain this practice of good living, we try to eat right, take dietary supplements, and stay active into adulthood. Preserving bone health is of particular interest to astronauts aboard the International Space Station, as the environment of space can sap the strength from their skeleton at an alarming rate.

Typically, humans living in space lose one to two percent of their bone mass per month, even with exercise. To combat this loss, the station crew uses a combination of nutrients and specially designed workout equipment. Meanwhile, scientists run various studies on the station to try to better understand and fight this accelerated deterioration. One such investigation is Bisphosphonates as a Countermeasure to Space Flight Induced Bone Loss, or Bisphosphonates.

The Human Research Program at NASA's Johnson Space Center, along with the Japanese Space Agency, or JAXA, work together on this study to see if the medicine's ability to block the breakdown of bone will help astronauts to retain bone density while on orbit. Seven astronauts from the United States, Canada, and Japan took part in this investigation. Participants ingested one 70 mg alendronate pill per week prior to and during space flight, along with vitamin D supplements and routine workouts. For comparison, the study also includes crew members who use exercise only.

"Since exercise alone has not been entirely successful in preventing bone loss in astronauts during long duration missions, we hope to determine if a combination of anti-resorptive drugs, in this case oral alendronate, and in-flight exercise will reduce bone loss and renal stone risk." said Adrian LeBlanc, Senior Scientist at Universities Space Research Association in Houston, Texas. "Bisphosphonate medication is used to reduce bone breakdown in osteoporosis patients on Earth. Its use in space was a logical extension, since space flight increases bone breakdown."

Before and after flight, astronauts have their bones scanned using Dual Energy X-ray Densitometry, Quantitative Computed Tomography and Peripheral Quantitative Computed Tomography—methods for detailed medical bone imaging. These scans help to determine and compare bone density. Secondary measurements, such as urine and blood collection and other scans like ultrasound, provide researchers with additional data for analysis.

Another risk associated with bone loss during long-duration space travel is the increased levels of calcium in urine, known as hypercalciuria. As bones break down, the body releases the excess calcium into the excretory system, which leads to the risk of renal or kidney stones. Reducing bone loss also will lower calcium excretion and improve kidney health.

The investigators came up with the idea for this study after running trials of the medication on research subjects here on Earth. The encouraging results prompted them to explore a similar application for use in space. From the bed-rest studies done by the NASA and JAXA teams on Earth, it was shown that bisphosphonates might be useful in preventing the loss of bone mass and the development of kidney stones.

If this flight study shows improved bone health with the addition of bisphosphonates, then the benefits could have a ripple effect for the astronauts and station research. The crew may have more time available to use on different tasks, such as other microgravity investigations, if less exercise were necessary. "In addition, bisphosphonates would be valuable in case exercise equipment fails or the astronaut cannot exercise because of injury or illness," said LeBlanc.

On Earth, the knowledge from this study could aid those suffering bone loss from disuse, such as spinal cord injury patients. This is important, since astronauts may regain bone mass with exercise upon return to Earth, but the elderly are less likely to have the stamina to use workouts to recover what they have lost.

"Medical research on problems caused while traveling between space and Earth, going from no gravity to 1G, has the potential to create new treatments and prevention methods on Earth," said Toshio Matsumoto, Professor and Chair, Department of Medicine and Bioregulatory Science, University of Tokushima Graduate School of Medical Science in Japan, in a recent interview. "Specifically, I think these experiments will become an important information source for medical issues in our aging society to prevent the loss of bones and muscle mass."

According to LeBlanc, initial findings from the investigation are very positive and there are plans to publish the flight study results later this year.