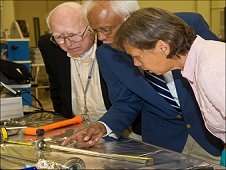 From left to right: Alex Lehoczky, project scientist at the Marshall Space Flight Center, Surendra Tewari, professor at Cleveland State University, Cleveland, Ohio, and Petra Neuhause with Astrium, Germany examine the first U.S. sample processed in the solidification quench furnace in the Materials Science Research Rack. The sample was returned to the ground via STS-133 and SpaceX's Dragon is expected to bring back similar samples when it returns to Earth. (NASA)
View large image 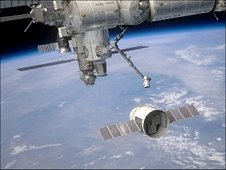 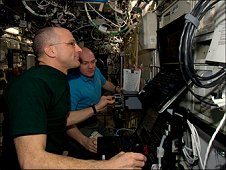 In the International Space Station's Destiny laboratory, NASA astronaut Don Pettit (foreground) and European Space Agency astronaut Andre Kuipers conduct the first of three sessions on the ROBoT simulator in preparation for the arrival of the SpaceX Dragon. On May 22, 2012, SpaceX lifted off from the Kennedy Space Center. The goal of Dragon's planned 21-day mission is to test the unpiloted capsule's ability to rendezvous with the space station. (NASA)
View large image The SpaceX Dragon demo flight brings a new American transportation vehicle onto the scene for travel to and from the International Space Station. Currently there are other ways to reach station, however only one vehicle, the Russian Soyuz, offers return capability. The SpaceX Dragon adds a for welcome additional option the transport of supplies and research equipment from the station to the ground.

The demo flight, which launched on May 22, 2012, is the first Commercial Orbital Transportation Services, or COTS, vehicle to journey to the station. People from around the country may watch this flight and mission for historic significance, but select students are following along with a more personal interest. This is because Dragon carries the Student Space Flight Experiments Program, or SSEP, Mission 1 investigations to the station.

These SSEP studies come from 12 communities around the U.S. and were whittled down from 779 proposals to the final 15 manifested for this flight. Participating students designed their own experiments using flight-approved fluids and materials. These then were loaded into NanoRacks modules for power and data capabilities while operating aboard station. ' What has scientists, like those at NASA’s Glenn Research Center, excited about this flight, however, is not what went up, but what is planned to come down. The Dragon's ability to increase the capability for returning experiments and hardware from the space station to Earth will enable researchers to have more frequent travel options for their investigations.

"This is a very important mission for us," said Fred Kohl, research project manager for the International Space Station and Human Health Office at Glenn. "The most important aspect is the return delivery to Earth. In general, nowadays, launching stuff to the station is not a problem. This vehicle will ensure we can get back our supplies and experiment hardware."

Glenn researchers are eager for the return of the Shear History Extensional Rheology Experiment, or SHERE. They use this investigation to look at the effect of preshearing -- a rotational stress -- and the strain it puts on polymer fluids. In microgravity, this fluid was stretched in each experiment and now the data and supplies will come back to the ground for analysis. The goal of this study is to improve manufacturing processes for things like liquid adhesives.

The articles returning to Earth from include items such as a toolbox, fluid modules, stowage trays, cables and a keyboard, and most importantly science data recordings. These recordings provide scientists with the information for further study.

Glenn researchers also anticipate the return of facility items from the Multi-user Droplet Combustion Apparatus, or MDCA , and the Combustion Integrated Rack-Fluids and Combustion Facility, or CIR. Parts coming back to the ground, such as fuel reservoirs, needle holders, gas bottles and absorber cartridges, are valuable for potential reuse.

Another exciting return planned from the station includes cartridges from investigations done on metal rods in the Material Science Research Rack, or MSRR. This facility enables tests controlling thermal, environmental and vacuum conditions for physical science. In this case, both the SETA-2 and the MSL-CETSOL and MICAST studies, which melted and solidified aluminum-alloy rods aboard the microgravity laboratory conditions of the station. Researchers eagerly await the return of these items so they can examine the resulting recrystallization patterns in the metal.

This mission is not only about transport, but a demonstration of the vehicle's capabilities and an opportunity for SpaceX and NASA to practice operations protocols. This includes a run-through of cold stowage transfer procedures using coldbags. These bags act as coolers to keep perishable samples at the appropriate temperatures until they reach their destination. Dragon launched with a coldbag holding the SSEP Mission 1 investigations. Upon return, items from the Crew Health Care System, or CHeCS, will be loaded in the coldbag not for temperature control, but as part of an early retrieval effort.