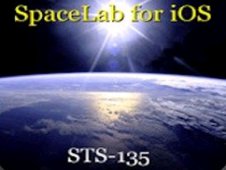 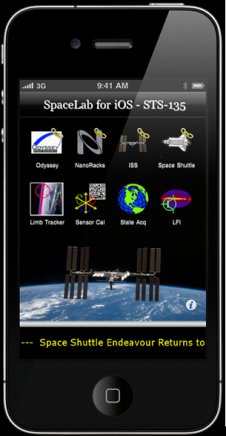 Screenshot of SpaceLab for iOS app.
(Courtesy of Odyssey Space Research)
View large image
One may think that participation with the International Space Station would be restricted to an exclusive club of high ranking officials and agencies. In actuality, students, teachers and commercial companies have also been taking advantage of the station's unique environment for years. One of those commercial companies, Houston-based Odyssey Space Research, plans to bring the experience to the rest of us via our mobile devices!

International Space Station National Laboratory partner NanoRacks LLC has a collaboration with Odyssey and Apple. This relationship enabled Odyssey to send two iPhone 4's to the space station as part of the STS-135 mission on July 8, 2011. These phones are just like the ones you can find at the store, but with certain alterations to meet NASA flight certification standards. It took less than a year to make the necessary changes and launch the devices to the station.

The iPhone 4 was selected for its mix of features, according to Odyssey CEO Brian Rishikof. "It had a three-axis gyro, and accelerometer, a high resolution camera and screen, and the means to manipulate the image. We had done some projects in the past that used all those features, but of course it was big, dedicated equipment and suddenly here it is in this small little package," said Rishikof.

The smartphones use the same software as their Earth counterparts and Odyssey used standard tools to develop a new app called SpaceLab for iOS, which will enable the planned research aboard the station. The app is also available for people to download to their own devices.

These devices are part of an investigation called NanoRacks Smartphone, which looks at how the phones will operate in space. The hope is to use the compact hardware in future research studies and to augment crew performance and productivity in operational activities. Currently there are four separate experiments that will run on the smartphones via SpaceLab for iOS.

The first study is Limb Tracker, a navigation experiment using photos of the Earth and image overlay manipulation to match the horizon to an arc to give an estimate of altitude and off-axis angles. Next is the Sensor Calibration or Sensor Cal experiment, which uses reference photos and the three-axis gyro and accelerometer for calibration to improve measurement accuracy. The State Acquisition or State Acq experiment also uses photos, but this time to estimate spacecraft orbital parameters. After the first three investigations are complete, the Lifecycle Flight Instrumentation or LFI experiment will operate to track the impact of radiation on the phones. To do this, the devices will monitor radiation-induced single bit upsets, which are unintended changes in memory location values.

One of the other goals in sending the phones to the space station is to engage the public. The SpaceLab for iOS app for users on the ground is identical to the software that was downloaded onto the space devices prior to launch. According to Rishikof, there is a setting in the application that indicates if the equipment is in microgravity or not. The software operates differently to accommodate the presence of gravity. "There are 200 million devices that run the operating system and could potentially run the application," said Rishikof. "Which means there are 200 million users out there that could get a sense of what it does; a sense of what an experiment in space might look like; a sense of participation."

The investigation is planned to run on the space station in the fall of 2011. The phones are not intended to have the same leisure appeal as they do on Earth, however, given the lack of iTunes, games and Internet or roaming connectivity. "People have asked me if we were loading games on the phones for the crew. No, we did not want them to be distracted, though certainly it would have been fun!" said Rishikof.

Once the investigation completes, the smartphones will return to Earth at the next opportunity. Scientists will then analyze the stored data to better understand how the devices can be used for future research on the space station and how the phones react to the space environment.

Rishikof hopes to be able to share some of the space data with SpaceLab for iOS app users, as well. "We do not have a monopoly on good ideas and hope users will suggest new and compelling things to add," commented Rishikof. "It is not a game, there's no leveling or challenges, the objective is to get data. It really just provides a way to see what's going on and while we don’t expect tons of downloads, we do expect a lot of interest. This would create an unusual opportunity for the entire world to get a look at some space data and explore it on their handheld device."

The NanoRacks Smartphone investigation is not the only phone-related study to launch to the space station with STS-135. The Synchronized Position Hold, Engage, Reorient, Experimental Satellites or SPHERES, which has been aboard station since 2006, will also use smartphones to enhance the satellites' capabilities. While the two studies use different hardware, the overall capabilities of these smartphones offer bigger returns for research using a smaller package.