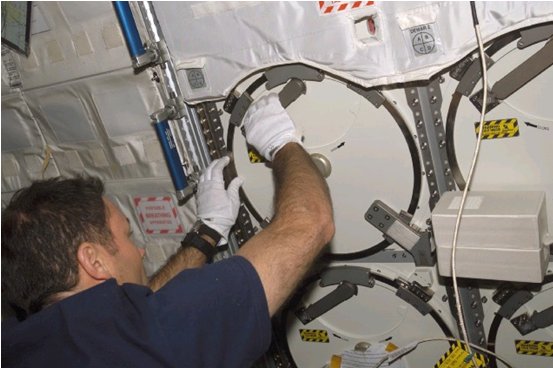 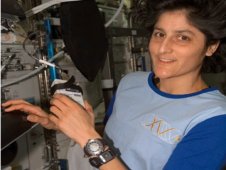 Astronaut Suni Williams shown wearing an Actiwatch as part of the Sleep-Long study. (NASA Image ISS015E09444)
View large image It is difficult to sleep in a strange place, especially when you are far from home. Just imagine if you were approximately 210 miles from home and free floating in a spacecraft orbiting the Earth, like the crew members aboard the International Space Station. Whether on Earth or in orbit, sleep is essential to human well-being. In space, getting enough rest is also vital for the safe completion of critical operations, as the crew may be one alarm bell away from a life-and-death situation.

To develop measures to improve the quality and duration of sleep in space, scientists are conducting the Sleep -- Wake Actigraphy and Light Exposure During Spaceflight -- Long investigation or Sleep-Long. This study examines the sleep -- wake patterns of the crew members while they are aboard the space station.

The quality and duration of slumber impact human health, attitude, and ability to focus. The Institute of Medicine released a report in 2006 stating that chronic sleep loss could lead to hypertension, diabetes, obesity, cardiovascular disease, stroke and multiple psychiatric disorders. Crew members spend years training for missions on strenuous schedules and then, when they finally reach the space station, their coordinated timetable does not allow for hitting the snooze button.

The manager of the Behavioral Health and Performance Element Human Research Program Space Medicine Division at NASA's Johnson Space Center in Houston, Lauren Leveton, Ph.D., points out the importance of the impact of sleep loss to the crew. "When you consider the risky business of spaceflight," said Leveton, "We want to reduce the risk of performance decrements and optimize people's performance capabilities."

The Sleep -- Long investigation uses an objective approach to monitoring sleep by having the crew wear an Actiwatch. This device, which resembles a wristwatch, monitors sleep/wake activity using a miniature accelerometer that records crew movement. The Actiwatch also measures the ambient light conditions during the study. There is a subjective element to the investigation, as well, in which the crew maintains a daily sleep log for the duration of one week, every third week while aboard the space station.

Information from the Actiwatch measurements and crew feedback have already led to changes in schedules and also countermeasures, such as naps or caffeine intake for the crew. At least 20 crew members have or will participate in this study. "Several crew members have expressed appreciation for objective data regarding their sleep," added Leveton. "Objective data are good to have, as individuals are not always the best estimators of how much sleep they are getting."

Before launch, each test subject provides the study with a baseline of sleep data. Scientists compare sleep-wake activity and light exposure patterns from the data obtained in orbit with the baseline data collected on Earth. Results from the investigation may lead to changes in lighting requirements, sleep shifting schedules and workload plans for future space station occupants.

The study may also help to indicate when additional measures are needed to minimize the risks of sleep deprivation in orbit. Leveton noted the need for enough sleep to maintain performance standards, especially during circadian rhythm shifts, citing that laboratory studies showed that limiting sleep to six hours a night for a week led to an equivalency of one full night of sleep loss. And while some crew members rely on stimulants, such as coffee, short acting sleep medications and sometimes melatonin, improving overall slumber is the goal for optimal performance and to maintain health and well -- being.

Findings from the study will not only benefit the crew of the space station for the immediate future, but also have important implications for future long-duration exploration. "Future missions will include increased duration, and there will be times of heavy workload and times of monotony, no evacuation plan, no Earth in view, and so on—the stressors of future spaceflight will be unprecedented," said Leveton.

Such findings may also provide improved sleep aids for those suffering from insomnia here on Earth, as well as benefit shift workers, such as hospital, law enforcement, and military staff. So when the crew members arrive safely home to their own beds, they too can look forward to a good night's rest.