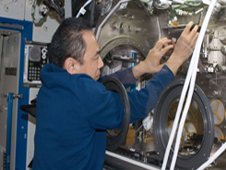 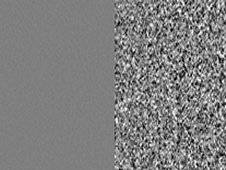 Typical Near-Field Scanning, or NSF, images: before (left) and after aggregation (right). From the analysis of the speckle pattern, properties of the aggregates are recovered. The field of view corresponds to approximately 330 µm. (ESA)
View large image
We know that developments in laboratory equipment can improve a scientist's ability to perform experiments, but the reverse can happen, as well, when research expands technological horizons. Technology at the heart of future ultra-fast computers, for example, could arise from an investigation on the International Space Station known as the Selectable Optical Diagnostics Instrument - Aggregation of Colloidal Solutions, or SODI-Colloid.

A colloid is a substance microscopically dispersed evenly throughout another substance. Examples range from common mixtures, such as milk or paint, to more complex solutions. By looking at the behavior of a specific type of colloid -- Teflon particles dispersed in a fluid -- scientists hope to uncover secrets, which may lead to technological advances. According to SODI-Colloid scientist Peter Schall, Ph.D., the investigation is basic at its core, with the potential to yield developmental dividends.

"SODI-Colloid aims at improving our understanding of how colloidal structures are formed, through an aggregation process that is governed by a parameter that can be easily controlled, the temperature of the liquid," said Schall. "This feature is of great potential interest in the fabrication of micro-structured materials, such as photonic crystals, that may be at the core of future ultra-fast optical computers."

The spherical colloids in this study were selected because they are stable in solutions for long periods of time and have what researchers consider a 'big' radius of 200 nanometer. On Earth, when the force of gravity causes colloid particles to settle to the bottom of a liquid, the sedimentation prevents a clear picture of how colloids react to factors other than gravity, such as temperature. Looking at the same solution in microgravity, however, prevents sedimentation and enables scientists to see what is really happening as the colloids move about and ultimately aggregate or crystallize.

This motion is called diffusion, and in SODI-Colloid there is an erratic response as the Teflon spheres interact and collide with solvent molecules of their liquid. Investigators look at various properties as the colloids move about, such as size and structure, at temperatures ranging from 86 to 140 degrees Fahrenheit (30 to 60 degrees Celsius). This process is relatively slow, as the particles can take up to a day to move 1 millimeter. Understanding how these particles interaction at specific temperatures could help scientists learn to control how and when colloids crystallize.

If scientists can identify triggers for Teflon colloid crystallization, they may be able to manipulate when and how the particles take shape. When light shines on the colloid crystals, their structure can then be used to filter certain wavelengths, such as colors. This colloidal capability to control the behavior of light has important implications for technology applications.

The European Space Agency, or ESA, sponsored SODI-Colloid study takes place within the Microgravity Science Glovebox, or MSG, located in the Destiny Laboratory aboard station. Astronauts install a ready-made instrument of five cells containing colloid solution samples inside the glovebox. There the experiment operates automatically, as the sample cells are each brought to a specific temperatures. The results are recorded and downloaded onto a hard drive, which is then returned to Earth for further investigation.

The SODI-Colloid investigation first ran on the space station in the fall of 2010. A second run, from Oct. 17 to Nov. 3, 2011, used the results from the first experiment to narrow the focus temperatures to close to or just below the aggregation threshold. The ability to run the study twice for these durations in microgravity is a capability unique to the station.

"The advantage of the space station is that it has the flexibility of a ground laboratory, allowing repeated runs in the same cell to achieve good statistics. In the case of SODI-Colloid, we were able to have a second set of experiment runs approximately a year after the experiment was first activated," said ESA project scientist Stefano Mazzoni, Ph.D.

Getting from the basics learned in this study to technological advances, however, will take an international cooperative effort over time. NASA, ESA, and the Japan Aerospace Exploration Agency, or JAXA, all plan to promote further colloidal research by developing space station instruments that would be available to the scientific community, according to Mazzoni.

"There is a broadly international interest in investigating colloids in space," said Mazzoni. "And this topic is the subject of intensive cooperation between scientists and coordination between space agencies."