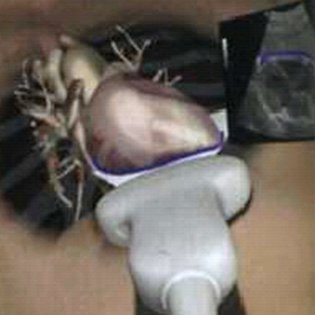 Illustration from ultrasound training materials showing an examination of the heart from the ICU Ultrasound Pocketbook.(Courtesy of Medical Imagineering)
View large image 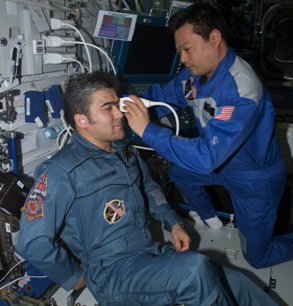 Using the ADUM protocols, ISS Expedition Commander Leroy Chiao performs an ultrasound examination of the eye (NASA image ISS010E18770)
View large image Not all great collaborations are planned. In fact, many of the best partnerships are the work of timing and serendipity. This is the case with two friends who met to talk over their lives and work and wound up brainstorming a new development with the potential to benefit people all over the globe.

Scott Dulchavsky, Ph.D. was the primary investigator for NASA's Advanced Diagnostic Ultrasound in Microgravity or ADUM investigation when he met up with his friend Dr. Stephen Smith, Chair of the American College of Surgeons National Ultrasound Faculty. During the course of catching up, they discovered an unlikely pairing between their respective careers. Dulchavsky had a cutting-edge software -- known as Onboard Proficiency Enhancement or OPE -- for training astronauts on ultrasound use. Smith, coincidentally enough, needed a better way to provide ultrasound education to residents and practicing surgeons around the country.

"I've known Scott for years," said Smith, "and about that time he told me about what he was doing with NASA to facilitate ultrasound training on the space station and he showed me the training modules they had created. We then thought this would be a great next step in putting together training programs for surgeons."

Dulchavsky recalls the positive reaction he received when he presented the ultrasound training software possibilities to the American College of Surgeons National Ultrasound Faculty Board. "I showed the software to board and they loved it, thought it was best in class, and wanted to incorporate the teaching methods into their new CD-ROM based courses for surgeons. This software is now a required component for ultrasound instruction for all surgeons," said Dulchavsky.

Commissioned by the American College of Surgeons Division of Education, the software was revamped to incorporate the technology developed for use on the space station with specialized surgical ultrasound knowledge and techniques. The resulting multimedia surgical training module is now in use by residents and practicing general surgeons on a national level. Known as the Ultrasound for Surgeons: Basic Course 2nd Edition, this software provides a core training education in ultrasound imaging for clinical applications.

"It's cutting edge stuff, it's really good," said Smith. "Residents love it, faculty love it. We've been able to disseminate ultrasound education to areas that we could never have reached before. There have been guys in the military that were deployed to Iraq or Afghanistan that have been able to use these modules on CD-ROM to bring their knowledge up to speed."

The software incorporates rich, multimedia components, such as the detailed Maya modeling, which demonstrates key relationships in the body via an animated anatomic model. This allows for an accelerated learning curve, compared to hands-on ultrasound techniques, simplifying many of the examination elements.

The origins of this training application on the space station contributed to the success of the final product, as well. "The space station was an excellent test bed to evaluate new educational paradigms to promote medical care in remote environments. The constraints of that environment required us to develop novel, just-in-time training methods, and focus on efficient processes. The astronaut and cosmonaut participants provided essential feedback to improve the software and procedures," explained Dulchavsky.

The basic course has been in use for approximately three years and a newer resident-focused module hit the market last year. Smith is confident that more courses will follow, given the advances enabled by the software. "It took us literally from sticks and stone knives into the computer age, as far as our computer training programs online. I think that all of our subspecialty training courses can at some point in time be placed online or on the CD-ROM based technology; our thoughts are to continue with the process and develop other modules as demand and time mandate," said Smith.

This space station technology is not done evolving, either, according to Dulchavsky. A follow-up ultrasound investigation called Ultrasound-2 launched to the space station with STS-135 on July 14, 2011. The OPE software may also find new life both in mechanics and humanitarian efforts, as talks are already underway with General Electric and Sonosite, with the intention of incorporating another version of this software on machines for point of care instruction. "We are also working with the United Nations to use some of this software for global ultrasound instruction," said Dulchavsky.