A joint effort between NASA and the Canadian Space Agency (CSA), RRM is an external station experiment designed to demonstrate the technologies, tools, and techniques needed to robotically service and refuel satellites in orbit, especially those not built with servicing in mind. RRM represents the first time the space station's Dextre robot is used for technology research and development, moving it beyond robotic maintenance of the orbiting superstructure.


The RRM Gas Fittings Removal task represents the first use of RRM tools in orbit. During the task, robot operators at NASA's Johnson Space Center remotely control Dextre to retrieve RRM tools and go through the tasks required to remove representative fittings (located on the RRM module) used on many spacecraft for filling various fluids and gases prior to launch. Subsequent RRM operations include practicing robotic satellite refueling and servicing tasks using Dextre, RRM tools, and the satellite piece parts and interfaces contained within and covering the cube-shaped RRM module. 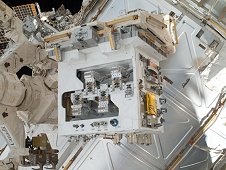 The Robotic Refueling Mission (RRM) module on the International Space Station before it was installed on its permanent platform. RRM will demonstrate robotic servicing technology and lay the foundation for future missions. (NASA)
View large image 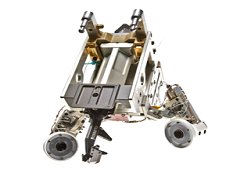 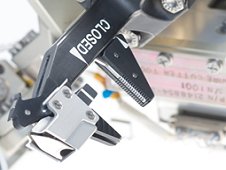 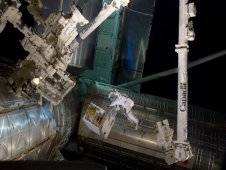 On July 12, 2011, spacewalking astronauts Mike Fossum and Ron Garan successfully transferred the Robotic Refueling Mission module from the Atlantis shuttle cargo bay to a temporary platform on the International Space Station's Dextre robot. (NASA)
View large image "The Hubble servicing missions taught us the importance and value of getting innovative, cutting-edge technologies to orbit quickly to deliver great results," continued Cepollina. "With the established infrastructure that the space station provides, our RRM team had support as we conceived, designed, built, and flew the RRM demo to space station in 18 months -- a timeline that many declared impossible."

The impact of the ISS as a useful technology test bed cannot be overstated, he said. "Fresh satellite-servicing technologies will be demonstrated in a real space environment within months instead of years. This is huge. This represents real progress in space technology advancement."

Launched to the space station in July 2011 aboard the last space shuttle mission (STS-135), RRM is the first in-orbit demonstration to test, prove and advance the technology needed to perform robotic servicing on spacecraft not designed for refueling and repair. RRM and Dextre will proceed through several tasks over about the next two years designed to demonstrate a wide array of servicing capabilities. RRM results are expected to reduce the risks associated with satellite servicing as well as lay the foundation and encourage future robotic servicing missions. Such future missions could include the repair and repositioning of orbiting satellites.

"The significance of RRM is that it demonstrates that robotic satellite-servicing technology exists now and it works correctly on orbit," says Benjamin Reed, Deputy Project Manager of SSCO.

The Canadian Space Agency is an essential partner in RRM operations. Dextre, the space station's twin-armed Canadian robotic "handyman," was developed by the CSA to perform delicate assembly and maintenance tasks on the station's exterior as an extension of its 57-foot-long (17.6 meter) robotic arm, Canadarm2. CSA wrote the software to control Dextre during RRM operations. Along with NASA Goddard and Johnson Space Center, CSA tested the software with flight-like tools and the RRM high-fidelity mockup in January-February 2012 at the MacDonald, Dettwiler and Associates Ltd. facility in Brampton, Canada. "The Canadian Space Agency has played a pivotal role in the development of space robotics, from the early days of the space shuttle to the work they are doing with Dextre on ISS," says Cepollina.

Included within the RRM module are four unique tools developed at Goddard: the Wire Cutter and Blanket Manipulation Tool, the Multifunction Tool, the Safety Cap Removal Tool, and the Nozzle Tool. Each tool is stowed in its own storage bay until Dextre retrieves it for use. Each tool contains two integral cameras with built-in LEDs to give mission controllers the ability to see and control the tools.

Viewers following along with the first phase of the Gas Fittings Removal task would see the following detailed activities. Mission operators will direct Dextre to remove three of the RRM tools from the module and perform functional checkouts prior to in-orbit operations. The RRM Multifunction tool will be used to release the "launch locks" that kept three tool adapters tightly secure during the shuttle flight of RRM to the space station. The next operation will entail Dextre using the Wire Cutter Tool to cut the lock wire that every spacecraft employs. This activity will show that even tiny lock wire, the thickness of four sheets of paper, can be isolated and cut using the latest robotic technologies, tools, and precision techniques.

The Gas Fittings Removal task follows on the heels of the 2011 RRM Launch Lock Removal and Vision tasks. On September 6-7, 2011, mission controllers used the Dextre robot to successfully release the locks that kept the four RRM Tools secure within the RRM module during the shuttle flight to the station. They also used Dextre's built-in hand camera to image the RRM hardware between sunlight and darkness, providing data that SSCO is using to develop machine vision algorithms that work collaboratively with the dynamic in-orbit lighting.

Drawing upon 20 years of experience servicing the Hubble Space Telescope, SSCO initiated the development of RRM in 2009. RRM results to date will be presented at the Second International Workshop on On-Orbit Satellite Servicing, hosted and held at NASA's Goddard Space Flight Center May 30-31, 2012.

Satellite servicing with astronauts is not new for NASA. Skylab, NASA's first space station, was repaired in space in 1973. Solar Maximum and Syncom IV, with help from the shuttle, were successfully repaired in the 1980's. In the 1990's NASA serviced the Compton Gamma Ray Observatory, Intelsat 6 and executed a series of highly successful servicing missions to the Hubble Space Telescope.

More recently, human and robotic servicing capabilities have contributed to the assembly, upkeep, repair and maintenance of the space station. With RRM, NASA can begin the work of confirming specific robotic satellite-servicing technologies needed for the development of future robotic servicing spacecraft.