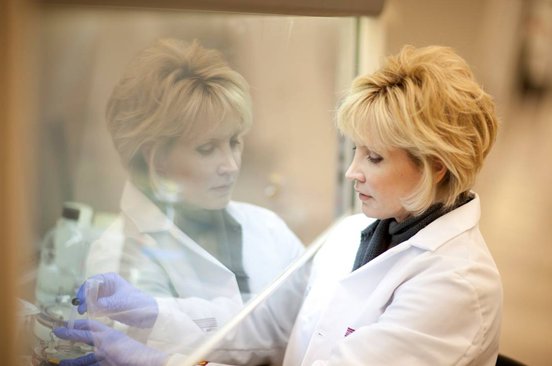 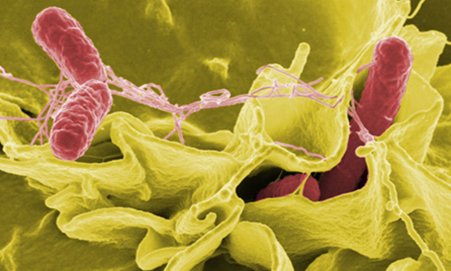 An example of Salmonella invading cultured human cells. (Image courtesy of Rocky Mountain Laboratories, NIAID, NIH) View large image Any scientist can tell you that research is a time-consuming pursuit. In fact, it can take decades to show results, as the knowledge compounds and inspires additional studies. This building of information is what led to the Recombinant Attenuated Salmonella Vaccine or RASV investigation, which launched to the International Space Station on July 8, 2011.

The investigation combines decades of expertise between two Arizona State University research teams. One team, led by Cheryl Nickerson, Ph.D. specializes in the use of the spaceflight platform to provide insight into how microbial pathogens cause infection and disease in the human body. The other team, led by Roy Curtiss III, Ph.D. focuses on the design and clinical testing of next generation vaccines to protect against diseases caused by pathogenic microbes. In addition, the Arizona State University researchers partnered with Mark Ott, Ph.D., at NASA's Johnson Space Center to strengthen the team's core expertise of space microbiology.

The vaccine samples that were flown on STS-135 are a genetically altered strain of Salmonella that carries a protective antigen against Streptococcus pneumonia -- a bacteria that causes life-threatening diseases, such as pneumonia, meningitis, and bacteremia. This organism is responsible for more than 10 million deaths annually and is particularly dangerous for newborns and the elderly, as they are less responsive to current anti-pneumococcal vaccines. "We have the opportunity," commented Nickerson, "to utilize spaceflight as a unique research and development platform for novel applications with potential to help fight a globally devastating disease."

Nickerson and Curtiss designed the RASV experiment to use the unique microgravity environment of the space station National Laboratory to increase the vaccine's anti-pneumococcal effectiveness by maximizing its ability to induce a protective immune response. Already a promising oral vaccine candidate that is in human clinical trials, RASV has many advantages over vaccines delivered by a needle. This includes activation of an additional arm of the immune system that cannot be engaged by vaccines that are administered as a shot. The Salmonella vaccine strain is genetically modified not to cause disease in humans, but instead carries an antigenic protein from Streptococcus pneumonia. This addition stimulates a protective immune response without actually causing the disease.

According to Nickerson, the initial clinical trials indicated a need for additional enhancement to the vaccine's ability to induce a potent protective immune response. By sending samples back to the space station for continued microgravity research, scientists hope that they will be able to better genetically engineer the vaccine strain to enhance its immunogenicity, while reducing or eliminating any unwanted side effects.

To accomplish this goal, special growth chambers containing the vaccine strain traveled to the station aboard the shuttle Atlantis, where crew members activated the samples. Scientists simultaneously are growing a control sample on the ground for comparison under otherwise identical conditions. The spaceflight cultured RASV strain returned to Earth with STS-135 on July 21, 2011.

Researchers will now evaluate the space-flown strain against the control sample for its ability to protect against pneumococcal infection and changes in gene expression. Molecular targets identified from this work hold promise for translation to develop new and improve existing anti-pneumococcal RASVs to prevent disease for the general public. Moreover, because RASVs can be produced against a wide variety of human pathogens, the outcome of this study could influence the development of vaccines against many other diseases in addition to pneumonia.

Early work that laid the foundation for the microgravity RASV investigation began in 1998 when Nickerson initially was funded by NASA. This was the first of what would be multiple studies from this team on Salmonella bacteria grown in true microgravity or ground-based analogues of microgravity. The goal was initially to see how the bacteria would respond to a microgravity environment.

The ground study led to 2006's Effect of Spaceflight on Microbial Gene Expression and Virulence or Microbe investigation. The findings for Microbe were surprising, as scientists discovered that Salmonella cultured in the spaceflight environment became more virulent -- meaning there was an increase in its disease-causing potential. This study also showed that spaceflight globally altered Salmonella gene expression in key ways that were not observed during culture on Earth, leading to the identification of a master switch that regulates this response.

The Nickerson team followed Microbe with 2008's Microbial Drug Resistance and Virulence or MDRV investigation. This study both reproduced the increased virulence effect in spaceflight-grown Salmonella and identified a way to turn off the increased virulence. Collectively, these investigations enabled researchers to devise the RASV flight experiment in an effort to develop a better vaccine against pneumonia. "The key to this research is the novel way that bacterial cells adapt and respond to culture in the microgravity environment," said Nickerson, "as they exhibit important biological characteristics that are directly relevant to human health and disease that are not observed using traditional experimental approaches."

The current investigation is not the final chapter in this journey towards vaccine development. Thanks to the recent signing of a Space Act Agreement between NASA and the Biodesign Institute at Arizona State University, Nickerson and her team are now users of the space station as a National Laboratory. Scientists participating in this study plan to fly a continuing series of experiments to the space station. This streamlined access will help to accelerate progress for this lifesaving vaccine.