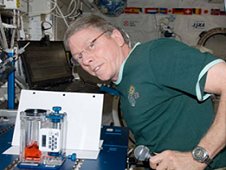 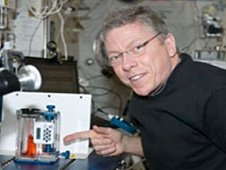 Astronaut Mike Fossum with CFE-2 Vane Gap unit on Maintenance Work Area. Photo shows how the shape of the liquid alters based on a geometry change to the test chamber, the result of slightly moving the internal baffle. (NASA)
View large image 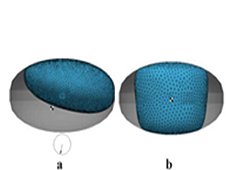 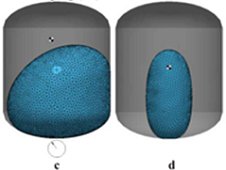 Click for to enlarge for a full image showing equilibrium bubble configurations predicted by SE-FIT in fuel tanks for a given gravitational acceleration (a, c) or centrifugal acceleration (b, d). (Chen, Y., Schaeffer, B. M., Weislogel, M. M., Zimmerli, G. A.)
View large image Just imagine you're a space explorer on a long journey. In a space capsule sitting on a rocket on a launch pad -- you blast off and leave Earth's atmosphere! But before you can continue your trip, you stop off at the local U.S. fuel depot in orbit to refuel your spaceship!

This may sound like a scenario from a "sci-fi" novel, but scientists anticipate these orbiting filling stations for future human space flights to distant objects. It is nearly impossible to lift enough fuel and life-support supplies for prolonged missions at one time with the equipment, personnel and other supplies needed for the flight. Scientists and engineers intend to store fuel and life support liquids, such as oxygen, water and ammonia, in depots in low-Earth, moon, or Mars orbits to provide 'local' supplies for longer crewed space flights.

For long-term storage in space, it is difficult to predict the location of the liquid in the tank when it is time to withdraw it. Orbiting spacecraft travel in a low-gravity environment, due to the forces from the orbital motion balanced with the gravitational attraction of the moon, planet or sun. The resulting nearly weightless state prevents liquids from pooling at the bottom of a storage tank, and makes gas bubble locations nearly impossible to predict.

Engineers previously assumed the worst case, which was that the bubbles would disperse randomly throughout the tank. Such bubbles in the transmission lines would interrupt and interfere with the liquid flow and could lead to equipment failure.

To predict the behavior of liquids in microgravity, one tool scientists use is an open-source computer program called Surface Evolver, or SE, developed by mathematician Ken Brakke currently at Susquehanna University in Selinsgrove, Pa. The software is an accurate predictor of the liquid-surface shape in space. While helpful, this program is rather burdensome to use when compared to the many modern design tools available to engineers.

Now, engineers have a new tool to apply to the software: a graphical user interface called the Fluid Interface Tool, or FIT. The user-friendly addition was developed by International Space Station researchers Mark Weislogel and Yongkang Chen at Portland (Ore.) State University. The combined program is called SE-FIT.

The interface allows engineers to easily enter design data or drawings into the program to solve complex static fluid interface problems. The software can be used to compute steady flows, given the right flow information. The program is capable of myriad configuration and stability calculations with a modest time investment by the engineer.

The specific advantage of the updated software is that it can help engineers consider the often counter-intuitive reaction of fluids to the geometry of the storage containers. "This software should be in the hands of every engineer who is designing a low-gravity fluids system," said Weislogel. "Before metal is cut to build such a system, the design should be proofed using a tool such as SE-FIT to determine the behavior of the liquid in the container and the reliability of the container design."

Designers and engineers are already starting to use SE-FIT. One example is a simulation run using the program to predict the location of the stored propellant while the spacecraft is in low Earth orbit. The spacecraft was slowly rotated about its axis every 90 minutes. To the scientists' surprise, the slow rotation was enough to move the propellant to the top end of the tank, away from the bottom where the fluid would normally be located in a 1-gravity environment.

"This information is critical when trying to understand where the liquid is going to be located in the tanks," said Greg Zimmerli with NASA's Glenn Research Center, Cleveland. "SE-FIT can help determine where the liquid is located, which is critical to propellant management subsystems such as storage, liquid acquisition, and fuel gauging."

Another capability was demonstrated during a space station investigation called the Capillary Flow Experiment, or CFE. Engineers used the software to predict the behavior of liquids in the experiments with varying test container shapes aboard the station beginning in 2004 and continuing to the present. The program's predicted liquid-gas behavior explained extremely small changes or even imperfections in container shape during the on orbit study that led to large changes in liquid behavior.

By using these predictions, engineers can design tanks and equipment to keep the fluids flowing with the correct distribution of liquids and gases in microgravity. This also means pumps and other mechanical equipment, such as centrifuges or thruster firings, will not be necessary to move liquids through the plumbing structure of space vehicles. This can significantly reduce design complexity, while increasing system reliability and saving on weight and money.

There is a connection between the behavior of fluids in microgravity in space and microscale small fluid devices on Earth. This software could be a critical program to help medical engineers design new methods for analyzing extremely small biological samples using tiny medical devices, often referred to as "lab-on-a-chip." Liquid surface wetting and bubble formation with such small samples can interfere with or deactivate the device.

By adjusting the shape of the device, however, liquids will flow via capillary forces without pumps or bubble interference. Designers could use SE-FIT to choose the correct container or conduit shape to move the liquid through the cells for analysis. "Using SE-FIT would accelerate the development of medical analysis equipment," said Weislogel. This new software package can help scientists answer the important questions for the next big adventure of humans in space and to improve our life on Earth