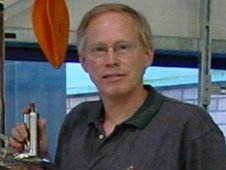 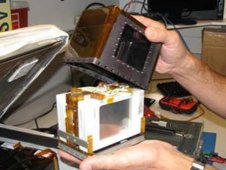 Opticell™ module being placed in protective casing. (Stefanie Countryman)
View large image The National Institute of Health, or NIH, has announced the selection of a new proposal for the Biomedical Research on the International Space Station, or BioMed-ISS, award. This prize helps NIH investigators to perform experiments to advance health on Earth using the platform of the International Space Station National Laboratory.

Bruce Hammer, Ph.D., is the lead investigator on the selected proposal, titled "Gravitational Regulation of Osteoblast Genomics and Metabolism." The focus of this study is bone loss, known as osteopenia. The ground research for Hammer's investigation began this September and flight dates to the space station will depend on the progress made in these initial experiments.

Osteopenia impacts not only the elderly and bed-ridden patients on Earth, but also astronauts after extended exposure to microgravity environments. In space, bone loss occurs at an accelerated rate that, per month, is equivalent to the yearly loss experienced by osteoporotic patients on the ground. "Understanding bone response to varying levels of gravitational force is critical toward developing rational approaches in drug design or physical therapy toward mitigating osteopenia," said Hammer.

Hammer is a professor in the Department of Radiology at the University of Minnesota where he focuses on the development and implementation of hardware for biomedical applications. For his ground-based portion of the NIH study, Hammer will grow bone cells, specifically osteoblasts and osteoclasts, in an OpticellTM cell culturing system. This equipment uses a magnetic force to counterbalance gravity, exposing the cells to simulated microgravity, or 0 g, and hypergravity, or 2 g.

A partnership with Bioserve at the University of Colorado will provide the incubators to cultivate the cells on the space station and logistical support. Hammer will examine the response of bone cells to the variable gravity environments of Earth and the space station. In particular, the investigation will measure gene expression, signaling pathways and metabolomic signatures. "The space station is an incredible, one-of-a-kind resource that is now ready for a multitude of biology-based scientific investigations," said Hammer. "This project will help identify mechanisms and pathways that can be addressed to mitigate bone loss on Earth."

The unified goal of NASA and the NIH using this award is to increase our understanding of human physiology and health on Earth and in space using the unique microgravity and radiation environment and resources found aboard the station. Hammer's investigation joins three other previously chosen proposals, including studies on immunosuppression, bone loss and gastrointestinal health.