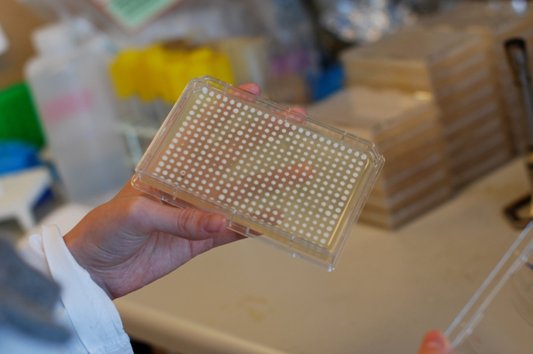 Researchers will grow yeast samples in petri dishes like the one pictured above both on the ground and aboard the International Space Station as part of the Micro-4 investigation.(University of Toronto Photo)
View large image 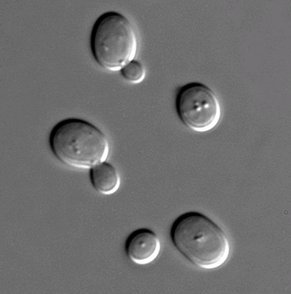 Sacharomyces cerevisiae cells in differential interference contrast microscopy at room temperature.(Wikipedia Photo/Masur)
View large image Chefs across the globe may not know it yet, but their baker's yeast just left the kitchen and blasted off into low Earth orbit. Hitching a ride on the space shuttle Atlantis on July 8, 2011, the samples will be grown on the International Space Station as part of the Genotypic and Phenotypic Changes in Yeast Related to Selective Growth Pressures Unique to Microgravity or Micro-4 investigation. Capable of raising more than just breads, this useful organism will help researchers better understand the impact of the space environment on live cells in humans.

This yeast -- S. cerevisiae -- has been of use since the ancient Egyptians first figured out how to harness it for wine and bread making. In modern times it is still used for baking and was the first organism to have its genome fully sequenced. Scientists hope that by studying the changes of yeast in microgravity, they will better understand the changes human cells may experience during long-duration spaceflight. Gaining better knowledge of genetic alterations by studying yeast growth during this microgravity research may also help in understanding how these changes could manifest in human disease here on Earth.

This investigation is a collaboration with BioServe Space Technologies, Durham Veterans Affairs Medical Center, and the University of Toronto. According to Michael Costanzo, Ph.D. and one of the co-investigators for Micro-4 at the University of Toronto, the similarities between human cells and the yeast's genetic makeup makes it ideal for study in space. "We are examining which genes are important for cell growth and survival in a zero gravity environment. The results of our 'yeastnaut' experiments may provide insight into which set of human genes are important and how these genes work together to help organisms/humans deal with extreme environments associated with space travel -- such as zero-gravity and elevated radiation."

Two different sets of experiments will take place as part this study. The first will grow yeast cells in petri dishes using temperature-controlled chambers. On July 12, scientists on the ground remotely changed the temperature from 4° C to 30° C -- the optimal temperature for yeast cell growth -- to activate the on-orbit samples. The cells continue to grow for 48 hours before the temperature is cooled again and the samples are stowed for return to Earth for analysis. The second experiment includes the use of a liquid media to grow the yeast. During the mission, astronauts will transfer the samples to fresh liquid media twice before stowing them, as well.

Both studies will look at how cells adapt to the space environment using the yeast deletion series -- a collection of      ≈ 5000 yeast strains, each of which has been deleted for a different gene. In other words, a collection of yeast cells that have been genetically engineered to help scientists to figure out what genes are important for specific responses to microgravity. The goal is to see which strain is best suited to spaceflight, showing researchers which genetic traits are capable of survival in microgravity.

The convenience of yeast as a test subject also provides an important avenue to understanding how living things adapt to space. Due to the small number of humans who have traveled in space, as well as the short duration of their exposure, little is known about the effects of long-term zero gravity on biological systems. "In contrast," said Corey Nislow, Ph.D. and co-investigator from the University of Toronto, "in both our experiments, we have huge sample sizes -- millions of cells -- and they will be monitored for 20 generations, the equivalent of 400 human years."

Control studies will take place on the ground at Kennedy Space Center, Fla. The space shuttle will also carry an identical set of samples to those that will transfer to the space station. These duplicate samples, however, will remain on the shuttle to be "flown, not grown," explained Nislow. Returning to Earth with Atlantis, these duplicate samples will be activated on the ground to investigate growth in tandem timing to those aboard the station.

While the STS-135 mission is the final shuttle flight for NASA, scientists for this study will not have to wait for the certification of new flight vehicles to continue their research. The hardware designed and used for Micro-4 is not limited to the harsh environment of space, but may also find use in Earth-based extremes for future yeast experiments. "It is important to remember that it's fun to fantasize about life in other parts of the solar system, yet we sometimes overlook the fact that life thrives at incredible extremes here on Earth," commented Nislow. "Such as in boiling water around ocean vents, in the polar ice caps, and even in environments so acidic that they would melt metal!"