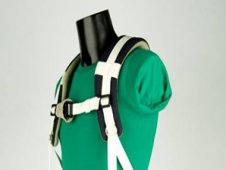 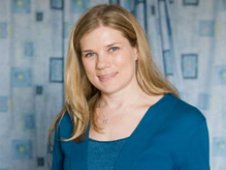 
After years of chaffing, bruising, and discomfort in some astronauts, running in space just got easier. Whether it's a two-mile jog or a half-marathon, many astronauts on the International Space Station find their stride and enjoy a relatively pain-free run thanks to the custom-fit, backpack-inspired Glenn Harness.

Because their bones are not under stress or heavy loads in space, astronauts on orbit can suffer a rapid loss of bone mineral density. Without exercise the average monthly loss in astronauts during a six-month stay on the space station is approximately equivalent to the average annual loss that is suffered by post-menopausal women on Earth.

In response, astronauts follow a bone-strengthening routine that includes treadmill running. While the space station has two treadmills, just having the machines available isn't enough. The microgravity environment of space means astronauts cannot simply step onto a treadmill and jog through a twenty-minute run.

"The only way you can run on a treadmill in space is to have a harness that pulls you back toward the treadmill surface," said Peter Cavanagh, University of Washington professor and former Director of the Cleveland Clinic's Center for Space Medicine that developed the new harness design. "What you want ideally is a harness that will apply a force exactly equal to your body weight."

To provide the mechanical stimulus for healthy bones, the runner needs an impact that represents their full body weight as it is on Earth. Depending on the astronaut, that could be 220 pounds, up to 110 pounds provided by the harness on each side of the body. Compared to the 80- to 90-pound backpack that is considered a heavy load on earth, full body loading is an "extraordinarily difficult loading situation," according to Gail Perusek, NASA's Glenn Research Center, Principal Investigator and Project Manager for the Glenn Harness flight studies.

"The torso is basically a cylinder. To get traction you need to apply a downward force. All you have to work with are the shoulders and the hips," said Perusek. "The original treadmill harness was mostly just Nomex fabric and webbing with minimal padding (Aramid felt). The harness was one-size-fits-all and cumbersome to adjust. It was also inadequate to transfer loads to the hips, where 70-80% of the load should be going."

Not only did the original harness not transfer loads well, some astronauts found it uncomfortable. One astronaut said the old harness gave him "hot spots." So he tried using duct tape to protect his skin, leaving him with a few scars. Other astronauts shared his frustration. Crew members complained at times about rubbing, chaffing, and bruising at the shoulders and hips.

Because of the discomfort, astronauts reduced the loads and, as a result, the thinking goes, failed to provide enough stimulus for bone maintenance. Investigating a new design became an obvious direction for the research team.

"Conceptually, the treadmill harness is like a backpack harness. You're bearing a downward load with the backpack and you're bearing it on your shoulders and hips. This was a key insight for the research team," said Sara Novotny, who was a Research Engineer on Cavanagh's team at the Cleveland Clinic.

The research team went to backpack manufacturers Kelty and Osprey Packs to learn what those companies had done to improve the comfort of carrying heavy loads. The team then selected a mixture of off-the-shelf components from the backpack manufacturers and added some parts of its own to produce a composite harness.

Novotny, a Colorado native who describes the harness as similar to a "backpack without the pack," assembled the new harnesses that were then used in a number of research studies, including those conducted in NASA Glenn's Enhanced Zero-gravity Locomotion Simulator, which replicates running on a treadmill in zero gravity.

Ultimately the new experimental Glenn Harnesses were tested aboard the space station in a side-by-side comparison with the operational harnesses. Harnesses equipped with innovative, non-invasive instrumentation provided first-ever insight into how crew members were loading the harnesses in-flight. Crew feedback regarding comfort provided qualitative data, and enthusiasm for the new design.

The collaboration between NASA Glenn and the Cleveland Clinic resulted in the much more comfortable and practical Glenn Harness.

The Glenn Harness has a softer, more malleable interior with a harder exterior, to better distribute loads and avoid hot spots. The hip belt is molded to hug the pelvis, and has a "split feature" to minimize pressure at the hip bones. The shoulder straps are designed in an "S" shape that lets them cut across the chest so they don’t impede the ability to breathe while running under a heavy load.

The Glenn Harness can be easily adjusted while running and is designed for a custom fit with a range of sizes from small to extra large in both female and male versions. The harness sizes can be blended as necessary. For example, a large shoulder strap can be combined with a medium waist strap for a perfect fit. A more recent development is a newer shoulder-strap design specifically for women.

With the new harness it is possible to adjust how the load is distributed between the shoulders and the hips. The molded waist belt allows for more comfortable distribution of a large load to encourage astronauts to run under a heavier load, a condition believed to be necessary for bone health.

Along with the custom fitting, another reason for providing each astronaut with their own harness has to do with the basic feature of a good workout.

"It's athletic equipment. They sweat in it. The harness never gets washed. They wear these things for the entire six-month increment," said Perusek.

At the suggestion of one astronaut, the Glenn Harness now employs a biocidal fabric on surfaces where there is contact with the body. This antimicrobial material kills the bacteria that causes odor and causes things to grow. Pre - and post-microbial tests confirm "the stuff works great," said Perusek.

The new harnesses are endorsed as a crew preference item and are provided by request to the U.S. on orbit segment. They can take up to six months prior to launch to schedule the pre-fit session with the crew member and conduct a crew familiarity briefing. The new harnesses take about eight weeks to assemble and certify before they are ready for use in space. The future plan is to have an inventory of harnesses in stock, and certify them for operational use as the primary treadmill harness for the space station.

The next step is to evaluate whether use of the new harness influences bone health in long duration crew members.