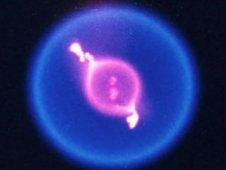 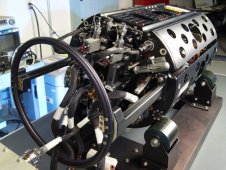 In space, where there is no up or down, flames behave in unconventional ways. And when your entire world is the size of a five-bedroom home like the International Space Station, putting out even a small fire quickly is a life-and-death matter.

Since March 2009, NASA's Flame Extinguishment Experiment, or FLEX, has conducted more than 200 tests to better understand the fundamentals of flames and how best to suppress fire in space. The investigation is currently ongoing aboard the space station.

When a flame burns on Earth, heated gases rise from the fire creating a buoyant flow that draws oxygen into the flame and combustion products away from it. In space, warm gases do not rise, and molecular diffusion drives flame behavior.

"In space molecular diffusion draws oxygen to the flame and combustion products away from the flame at a rate 100x slower than the buoyant flow on Earth," Dan Dietrich, project scientist, NASA's Glenn Research Center, said.

Flames in space burn with a lower temperature, at a lower rate, and with less oxygen than in normal gravity. This means that materials used to extinguish the fire must be present in higher concentrations. The slow flow of air from the fans mixing the air in a spacecraft can make the flames burn even faster.

To help understand how flames behave and burn in space, FLEX researchers ignite a small drop of either heptane or methanol. As this little sphere of fuel burns for about 20 seconds, it is engulfed by a spherically symmetric flame. The droplet shrinks until either the flame extinguishes or the fuel runs out.

"Thus far the most surprising thing we've observed is continued apparent burning of heptane droplets after flame extinction under certain conditions; currently, this is entirely unexplained," said Williams, who has studied combustion for more than 50 years.

From ignition to extinguishment, the entire event is recorded by cameras housed in the NASA Glenn-designed-and-built Combustion Integrated Rack, or CIR, which is located inside the U.S. Destiny Laboratory module of the space station.

"You have both elements being represented in the FLEX experiment. Both the exploration-driven fire safety research and the more fundamental science research," Dietrich said.

As for the fundamental science of combustion, there are still many discoveries to be made, even for an experienced professor who has studied the subject since college.

"As a Princeton undergrad, I saw in a graduate course the conservation equations of combustion and realized that those equations were complex enough to occupy me for the rest of my life; they contained so much interesting physics," Williams said. "There are many currently unknown things about combustion processes waiting to be revealed by future scientific experiments."

The better we understand the physics of combustion, the better we can control it and design energy-efficient processes.