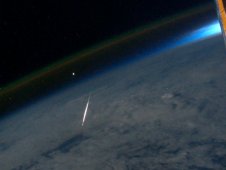 A Perseid meteor lights up as it streaks through the Earth's atmosphere, as seen and photographed by Ron Garan while aboard the International Space Station on August 13, 2011.
(NASA Image ISS028-E-24847)
View large image 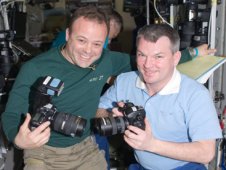 NASA astronaut Ron Garan (left) and Russian cosmonaut Alexander Samokutyaev, both Expedition 27 flight engineers, pictured while holding still cameras in the Zvezda Service Moduleof the International Space Station.
(NASA Image ISS027-E-016244)
View large image
With the bright moon that was out on the evening of August 13, many astronomy buffs were not able to fully appreciate the spectacular Perseid meteor shower going on in the night sky. From the International Space Station, however, astronaut Ron Garan had a front seat view as part of the Crew Earth Observations, or CEO, investigation.

Using a Nikon D3S digital camera with a 22 mm lens, Garan captured a stunning photo of one of the Perseid meteors streaking through Earth's atmosphere. You can see part of the space station's solar array in the image, allowing the viewer to share in the unique perspective of the crew from low Earth orbit. This photograph will add to the CEO investigation's collection of hundreds of thousands of Earth images.

The astronaut photography for CEO supports global research, according to William Stefanov, chief scientist for the Engineering and Science Contract Group supporting the Astromaterials Research and Exploration Science Directorate at NASA's Johnson Space Center. "The inclined equatorial orbit of the station, and having 'humans in the loop,' makes it a useful and unique platform in comparison to unmanned polar-orbiting sensor systems. From the space station, data can be collected on Earth processes at different times of day, with different image resolutions, illumination conditions and viewing angles, than is possible from the majority of robotic sensor systems," said Stefanov.

One of the upcoming developments for CEO includes camera updates to enable images in near-infrared wavelengths. This will make it possible to better map vegetation conditions using crew photography. According to Stefanov, this is just one of the advantages to a station-based perception of our planet. "The orbital perspective allows us to view and record Earth processes that would be difficult, if not impossible, to measure from the ground at scales that provide local, regional, and global perspectives. Atmospheric and oceanic processes, patterns of vegetation change and urbanization, changes to Earth's snow and ice cover and glaciers, and detection of erupting volcanoes, are all examples of Earth processes of interest to our societies that we can only efficiently monitor, in a global sense and on repeatable time intervals, from space," said Stefanov.

Garan tweeted his photograph of the meteor from his @Astro_Ron Twitter account, sharing his unique perspective with his followers on the ground. "What a 'shooting star' looks like #fromspace Taken yesterday during Perseid Meteor Shower…" tweeted Garan. The hash tag "#fromspace" is a search tool for Twitter users to use to follow tweets coming from the space station, as Garan is one of many crew members to tweet while on orbit, including fellow astronaut Soichi Noguchi, or @Astro_Soichi.

These meteors are fragments of the Swift-Tuttle comet, which get caught up in our planet's gravitational pull. When the fragments enter Earth's atmosphere, they begin to burn up, which appears as a visible vapor trail against the night sky. The Perseid Meteor Shower continues during the daytime, however it is not bright enough to be visible. This annual meteor shower is best viewed from the northern hemisphere and continues through August 24 this year, though peak days were August 12 to 13, 2011.

While Garan enjoyed the Perseids from his singular vantage point, those on Earth had the ability to not only watch the meteor shower, but also participate in an online NASA chat with experts on this natural phenomenon. This was the second such chat, based out of Marshall Space Flight Center. The Perseid Meteor Shower lights up the sky every August, so if interest persists, the chat may become an annual event.