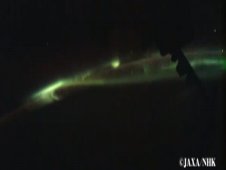 Screenshot of video showing aurora from the vantage point of the International Space Station taken with the SS-HDTV camera. (JAXA/NHK)
View large image 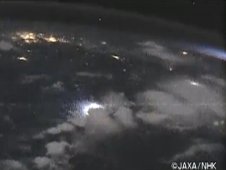 Screenshot of video showing lightning, airglow and the sunrise from the International Space Station taken and downlinked in real time via the SS-HDTV camera. (JAXA/NHK)
View large image 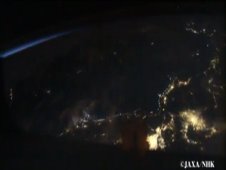 Screenshot of video showing a night view of Japan as seen from the International Space Station taken with the SS-HDTV camera. (JAXA/NHK)
View large image Part of human fascination with space is the chance to look back at our own planet from afar. The unique vantage from the International Space Station affords a vista both breathtaking and scientifically illuminating.

Here on Earth, both scientists and spectators rely on the station's crew to record and transmit images and videos of what they see to share in their experience. Until recently, reduced lighting conditions at night, combined with insufficiently perceptive equipment, made some of the most beautiful views difficult to capture.

This changed with the arrival of the Super Sensitive High Definition TV, or SS-HDTV, camera on the space station. With the SS-HDTV, the crew can document new and more detailed footage of the dynamic interactions that take place in the area between the Earths' atmosphere and the vacuum of space, known as the cosmic shore.

According to Keiji Murakami, a senior engineer with the Japan Aerospace Exploration Agency, or JAXA, this camera's superior recording capability opens up a significant window of observation. Some may not realize that the station orbits the Earth 16 times a day, experiencing multiple sunrises and sunsets during those 24 hours. The crew actually has a 50/50 chance of a night view. "Half of the Earth view from [station] is a night view. And the day view and night view are very different," said Murakami.

By October, JAXA astronaut Satoshi Furukawa had logged more than 30 hours of video using the camera. While the Earth observations are an amazing sight, they are also an important part of the research goals for the space station. From images taken by crew members aboard station, scientists can research natural phenomena and man-made changes to the planet.

Japan Broadcasting Corp., or NHK, which is similar to the U.S.'s Public Broadcasting System, or PBS, aired the first public videos showing the SS-HDTV camera's capabilities Sept. 18, 2011. The resulting show was appropriately titled "The Cosmic Shore," and it thrilled audiences with a spectacular view of natural phenomena, such as aurora and lightning. Furukawa filmed and narrated the video footage, which also shared man-made wonders, like the lights of Japan at night, in greater detail than previously possible.

Murakami comments on the merit of the SS-HDTV camera system's ability to capture momentary phenomena, like meteors and sprites -- a form of upper atmospheric lightning. "Using this super sensitive camera, we have observed the lightning, sprite, aurora, meteor, noctilucent cloud and airglow," said Murakami. "The phenomena of the sprite has not yet been studied in high definition until now. The color video of the sprite was taken for the first time from space using this camera."

This advanced equipment belongs to JAXA, in cooperation with NHK, and enables recording of the elusive phenomena that occurs within low-light conditions using an Electron Multiplying Charged Coupled Device, or EM-CCD, sensor. After filming, the crew downlinks the videos to the ground using data-relay satellites.

The SS-HDTV also can advance astronomical observations, according to Murakami. This equipment will continue to operate on orbit indefinitely. Even if a failure should occur, there is a backup camera and Panasonic SD card recorder already aboard the station as a precaution. As with many facilities and technology on the space station, this camera provides another asset available to future researchers as they continue to explore the space environment using the orbiting laboratory.