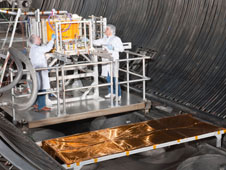 NASA Glenn Research engineers prepare the SCaN Testbed flight system hardware in Vacuum Facility 6 for rigorous thermal-vacuum testing. Image Credit: NASA
New and improved ways for future space travelers to communicate will be tested on the International Space Station after a launch later this year from Japan. The SCaN Testbed, or Space Communications and Navigation Testbed, was designed and built at NASA’s Glenn Research Center over the last three years.

The SCaN Testbed will provide an orbiting laboratory on space station for the development of Software Defined Radio (SDR) technology. These systems will allow researchers to conduct a suite of experiments over the next several years, enabling the advancement of a new generation of space communications.

The testbed will be the first space hardware to provide an experimental laboratory to demonstrate many new capabilities, including new communications, networking and navigation techniques that utilize Software Defined Radio technology. The SCaN Testbed includes three such radio devices, each with different capabilities. These devices will be used by researchers to advance this technology over the Testbed’s five year planned life in orbit.

“A Software Defined Radio is purposely reconfigured during its lifetime, which makes it unique,” says Diane Cifani Malarik, project manager for the SCaN Testbed. This is made possible by software changes that are sent to the device, allowing scientists to use it for a multitude of functions, some of which might not be known before launch. Traditional radio devices cannot be upgraded after launch.

By developing these devices, future space missions will be able to return more scientific information, because new software loads can add new functions or accommodate changing mission needs. New software loads can change the radio’s behavior to allow communication with later missions that may use different signals or data formats. 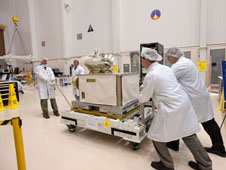 Glenn Research Center engineers and technicians (left to right, clockwise): Joe Kerka, Tom Hudach, Andrew Sexton, and Allan Rybar transport the SCaN Testbed flight system in the West High Bay area of the Power Systems Facility on a dolly cart. The team prepares to perform weight and center of gravity tests on the flight system hardware using lift equipment suspended in the background. Image Credit: NASA
The SCaN Testbed is a complex space laboratory, comprised of three SDRs, each with unique capabilities aimed at advancing different aspects of the technology. Two SDRs were developed under cooperative agreements with General Dynamics and Harris Corp., and the third was developed by NASA’s Jet Propulsion Laboratory (JPL), Pasadena, Calif. JPL also provided the five-antenna system on the exterior of the testbed, used to communicate with NASA’s orbiting communications relay satellites and NASA ground stations across the United States.

Glenn led the design, development, integration, test and evaluation effort and provided all the facilities needed to fabricate, assemble and test the SCaN Testbed, including a flight machine shop, large thermal/vacuum chamber, electromagnetic interference testing with reverberant capabilities, a large clean room and multiple antenna ranges, including one inside the clean room.

The SCaN Testbed will launch to space station on Japanese Aerospace Exploration Agency’s H-IIB Transfer Vehicle (HTV-3) and be installed by extravehicular robotics to the ExPRESS Logistics Carrier-3 on the exterior truss of space station.

The SCaN Testbed will join other NASA network components to help build capabilities for a new generation of space communications for human exploration.