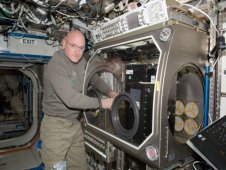 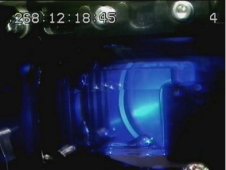 The video still above shows liquid flowing from left to right in an open wedge-shaped capillary flow channel as part of the Capillary Channel Flow, or CCF, investigation. (NASA)
View large image In the Capillary Channel Flow, or CCF, investigation aboard the International Space Station helps scientists develop innovative solutions for transporting liquids in microgravity. While fluids pool towards the bottom of a container on Earth, the minimal gravitational forces in the space environment do not allow for liquids to drain. To prevent bubbles in fuel systems and encourage fluids to flow in a planned direction, investigators are looking at specially designed chambers to guide liquids using wedge-shaped channels.

A recent video from the CCF study, which took place in the Microgravity Science Glovebox, shows this fluid physics experiment in action. In the recording you see a liquid flow from left to right in an open wedge-shaped capillary flow channel. The investigation helps researchers look at the limit for pumping liquids without generating bubbles in the flow, while also examining wedge-shaped geometry for bubble removal. This can improve the efficiency of pumping liquids from one reservoir to another, like from a fuel tank to a rocket engine. Video and data were collected and downlinked to investigators on the ground for analysis.

In a recently published feature on CCF, co-investigator Mark Weislogel, Ph.D., of Portland (Ore.) State University, explained the importance of addressing a solution to the nature of fluids in microgravity. "In a spacecraft tank application, if gas bubbles get to the engine, the engine can sputter or stall. If the fuel lines have these wedge-shaped sections, they can expel the gas en route, and the wedge-shaped section takes care of the separation for you," said Weislogel.

Optimizing fluid physics in microgravity can reduce weight and cost, by using the elegance of simplified geometric design to passively separate gas from the flow of liquids, rather than using an active device with moving parts. In particular, this study contributes to the future of next-generation fuel tank design, but also stands to benefit life support systems. This investigation is now complete for Increments 29/30 on the space station.