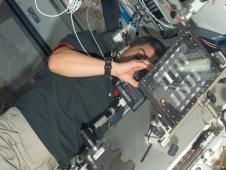 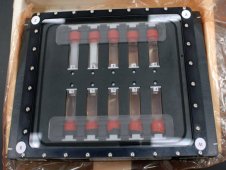 BCAT-6 slow growth sample module prior to launch to the International Space Station. (NASA)
View large image If you had the choice between a product that you had to shake before use and one that came premixed, you'd probably buy the one that was easier to use and worked best. Industries are aware of this, and of the benefits of products with a reputation of functioning as promised, use after use. In an effort to secure even better product formulas, Procter & Gamble Co., or P&G, decided to take their research to a higher level -- aboard the orbiting laboratory of the International Space Station.

Working with NASA, P&G funded an investigation of how gas and liquid phases separate and come together in microgravity. The Binary Colloidal Alloy Test-6: Phase Separation, or BCAT-6-Phase Separation, study specifically looks at colloids, which are like tiny spheres evenly dispersed in a fluid, gas or solid to help stabilize the mixture. Over time, these colloids can move around -- known as coarsening -- causing changes in the concentrations and properties of the substance.

On Earth, gravity complicates this research by causing heavy components to sink and lighter ones to float. In space, however, these forces are minute, revealing the natural movement of the colloids. The on-orbit samples' aging process works more slowly and evenly, making it easier to study.

Principal Scientist Matthew Lynch, Ph.D., of P&G, explained the benefit of removing gravity from the equation when looking at colloid dispersions in fluids. "What we want to do is decouple that gravitational piece from the fundamental underpinnings of this motion of coarsening so that we can superimpose it later and understand the problem holistically," said Lynch.

To conduct these experiments, astronauts set up the hardware for the study and homogenize -- blend -- the samples. They then take a series of time-interval pictures as a sample ages over a period of weeks. Changes in the samples are analyzed to reveal the coarsening. The samples are stored for a period of six months on the station, before the crew retrieves them for more imaging and return to Earth.

This investigation builds on previous BCAT studies that contributed to the collective knowledge of fluid physics in microgravity. "What [the investigation] really helps us do is create theories that help define a lot of the physics in our products," said Lynch. "This helps us to make some decisions, both in terms of creating appropriate experiments and compositions, as well as intellectual property related to some of those findings."

According to Lynch, about two thirds of P&G’s biggest brands are soft-matter systems -- things like fabric softener, deodorant and detergent, to name a few -- that could benefit from this study. Armed with a better understanding of the nature of the fluids separation, researchers can work on creating better stabilizers and product formulations. Stabilizers are expensive and take up space in products, so improved formulas can contribute to reduced costs that lead to less expensive products. Greater stabilization can also increase shelf life.

Applying the fundamentals of fluid physics to formulas can translate into profit across the industry. In products such as fabric softeners, forgetting to shake can lead to product failure and annoyed consumers. "If you go out to the store and buy something that's settled or something that's creamed on top, you pour it off out of the bottle and you're not going to want to buy it again. So we spend a lot of time trying to make products that stay well dispersed. It's a very big cost of time and money to try and to design products this way," commented Lynch.

The potential for BCAT research application in other areas is something that continues to grow. For instance, advanced colloidal formulas could also conceivably lead to improvements in items like liquid pharmaceuticals, which can be ineffective or even dangerous if not properly mixed when consumed. With better formulations, consumers could look forward to the certainly of a perfect product every time.

"I think the challenge is between how to connect up with the right people in the industry that will understand how to translate that high potential into practical sorts of things. So much of the success of station research is in being able to make those connections work well," said Lynch.