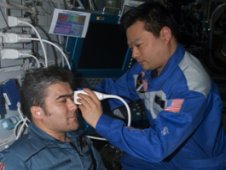 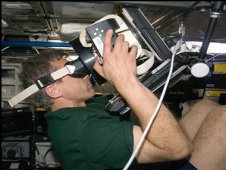 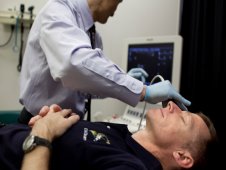 NASA astronaut Chris Ferguson, STS-135 commander, has his eyes imaged using ultrasound as he undergoes an eye examination at the Johnson Space Center Flight Medicine Clinic on Friday, March 11, 2011, in Houston. (NASA)
View large image Astronauts on the International Space Station are not allowing vision issues to keep them from completing their important tasks on the orbiting laboratory. In fact, they are taking advantage of the opportunity to study why weightlessness alters vision.

Even after 50 years of human spaceflight, scientists still are making new discoveries about human health in microgravity. New research points to a permanent vision risk for astronauts living without gravity. A large part of the International Space Station's mission is to use this data to design future studies to mitigate, and hopefully eliminate the dangers.

"What we are seeing is flattening of the globe, swelling of the optic nerve, a far-sighted shift, and choroidal folds," said Dr. C. Robert Gibson, one of authors of the study published in the October 2011 issue of Ophthalmology, the journal of the American Academy of Ophthalmology. "We think it is intracranial pressure related, but we're not sure; it could also be due to an increase in pressure along the optic nerve itself or some kind of localized change to the back of the eyeball."

The study identified new risks for those who live in space for at least six months. Blurred vision was the primary issue reported by the seven astronaut test subjects.

"After a few weeks aboard the [station]," said Astronaut Bob Thirsk, a Canadian Space Agency physician who spent six months as a member of the Expedition 20 and 21 crews in 2007, "I noticed that my visual acuity had changed. My distant vision was not too bad, but I found that it was more difficult to read procedures. I also had trouble manually focusing cameras, so I would ask a crewmate to verify my focus setting on critical experiments."

"Swelling of the optic nerve is a serious problem. If it's chronic, that could cause some permanent damage to the eyes," Gibson said. "We do see some change to the anatomy, to the structure of the eye; we see little wrinkles to the retina and the back of the eye, and change in the shape of the eyeball that may be permanent for some individuals."

Researchers are specifically looking at changes to refraction, which involves the way light rays focus inside the eye before images transfer to the brain. This may include alteration to the shape of the eyeball and signal a shift in vision. The swelling of the optic nerve seems to resolve over time, but the flattening of the back of the eye does not appear to return to normal.

Monitoring eye health is a routine activity for space station crews. Until recent years, however, NASA treated vision changes as a temporary problem to work around. The increase in reports of diminished focus in near-vision have now prompted more extensive testing.

"Our medical support team on the ground was superb," Thirsk said. "They launched an electronic ophthalmoscope on the next shuttle flight to the station. The retinal imagery from the ophthalmoscope, as well as ultrasound images of the backs of our eyes, helped our medical team determine the extent of our visual problems. I was really impressed with the responsiveness."

In-flight diagnosis and treatment also are critical aspects when planning for future long-duration spaceflight missions, particularly those leaving low-Earth orbit, or extreme environment missions -- this would include trips to Mars or an asteroid, where communication may be delayed and where returning home in a short amount of time is not possible.

To help meet astronaut vision needs on orbit, NASA flies space anticipation glasses for crew members over the age of 40. These glasses are regular eyeglasses with a stronger prescription for use in the event of vision change. The crew also has access to SuperFocus glasses -- adjustable focus glasses eliminating the need for bi- and tri-focal lens associated with multiple vision adjustments. These specialized glasses are in addition to an astronaut's regular prescription glasses.

"During the first half century of spaceflight, we have encountered and addressed many medical problems associated with orbital missions," Thirsk said. "However, as we extend human presence further into the solar system and expand the scope of our activities, we can anticipate that new medical issues will arise."

Using these microgravity findings, along with ground studies, NASA can develop concepts for future studies. A six month stay on the space station is a critical model for understanding of the effects of microgravity on crews as NASA and its international partners plan for future exploration missions. Findings may also advance the development of new treatments for vision problems here on Earth.