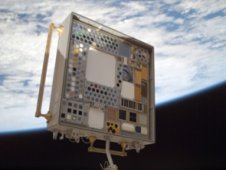 MISSE-3 on-orbit in July 2007. (NASA Image ISS015E19092) What was done on ISS: Understanding the effects of the extreme environment of space on different materials and devices is important for determining their durability for space missions.

The Materials International Space Station Experiment (MISSE) program investigates these effects through externally-mounted experiments on ISS. MISSE is led by Dr. Robert Walters of the U.S. Naval Research Laboratory (NRL) and Dr. William Kinard, formerly of NASA Langley Research Center, and is a collaborative effort with many participating organizations, with significant contributions to the program by Boeing, the Air Force Research laboratory (AFRL), the Air Force Office of Scientific Research (AFOSR) and various NASA Centers. MISSE is a series of external exchangeable test beds, called passive experiment containers (PECs), positioned on the outside of ISS, for studying the durability of materials and devices such as spacecraft polymers, coatings, structural materials, optics, solar cells, sensors, electronics and communications devices. To date, seven different MISSE PECs, containing thousands of materials samples, have been attached to the outside of the ISS, retrieved and evaluated for the effects of atomic oxygen (AO), vacuum, solar particle radiation, micrometeoroid and debris impacts, and extremes of heat and cold. Results demonstrate the durability of various materials when they are exposed to such an extreme environment. Many of the materials may have applications in the design of future spacecraft. The latest of the series (MISSE-7) was launched on Space Shuttle mission STS-129. MISSE 7A & &B were attached outside the ISS on the EXPRESS Logistics Carrier 2 on the S3 truss, and then opened and exposed to space during a spacewalk on November, 23, 2009.

Significance: Because true space environmental conditions are difficult to replicate on Earth, MISSE provides a valuable test platform that enables methods for correlating and extrapolating ground results. MISSE results have been used to understand and calibrate how materials that are already in use on spacecraft degrade in the space environment (e.g., polymers used for insulation, solar array materials) and predict the durability of new materials (e.g., thermal control coatings, solar cell materials) [1, 2, 3]. The NRL’s Forward Technology Solar Cell Experiment (FTSCE) used MISSE to rapidly place current and future generation space solar cells on orbit and provide validation data for these technologies [4]. With data from the ISS materials test bed, the development time for some Department of Defense satellite hardware components has been significantly reduced, and estimates of the return on investment for MISSE projects exceed 200 percent [5].

MISSE samples that are currently being tested on the ISS also include materials that are part of the design of the new Orion Crew Exploration Vehicle (CEV) [5]. MISSE investigators have obtained long-duration flight data and devised methods for predicting AO erosion yields that will provide important references for designers, developers, and builders of future spacecraft and instruments [1, 3, 4, 6].

The MISSE series results may provide data to further benefit Earth-based applications, such as art restoration and biomedical applications, which utilized AO techniques. For more information on the use of AO for art restoration, please visit: http://rt.grc.nasa.gov/main/featured-technologies/atomic-oxygen-restoration/.