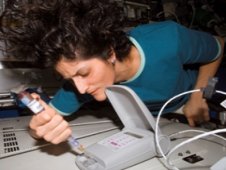 Astronaut Suni Williams, Expedition 14 flight engineer, places the sample from the swabbing unit into the LOCAD-PTS cartridge. (NASA Image ISS014E18822) What was done on ISS: Rapid assessment of biological and chemical surface contamination is important for ensuring astronaut health. Given the limited mass and volume on ISS, such assessments usually require sample return to Earth, which may take weeks or months.

The Lab-on-a-Chip Application Development-Portable Test System (LOCAD-PTS) study, led by Dr. Norman Wainwright of Charles River Laboratories, uses a commercial-off-the-shelf handheld device used for rapid detection of biological and chemical substances on surfaces aboard ISS. Astronauts swab surfaces within the cabin, mix swabbed material in liquid form to the LOCAD-PTS, and obtain results within 15 minutes on a display screen. The study's purpose is to effectively provide a rapid indication of biological cleanliness to help crew monitor microorganisms in the ISS cabin environment.

LOCAD-PTS was operated during Expeditions 14 through 20, testing various sites throughout ISS, including several chosen by the crew. Three types of cartridges were flown to detect three groups of microorganisms: endotoxin (a marker of gram-negative bacteria), glucan (fungi) and lipoteichoic acid (gram-positive bacteria). As the number of cartridge types on ISS increases, LOCAD-PTS’s applications will increase to include monitoring the cabin environment for other biological and chemical contaminants, and possibly monitoring blood and saliva of the crew to support medical diagnostics. Some blood analysis has already been done on ISS using the Portable Clinical Blood Analyzer (PCBA). 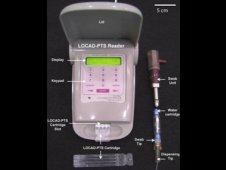 The LOCAD-PTS reader, cartridge and swabbing unit. (NASA/MSFC) LOCAD-PTS-Exploration, led by Dr. Jake Maule of BAE Systems, evolved from LOCAD-PTS to evaluate procedures for testing contamination for purposes of planetary protection. Conducted on Expeditions 18-20, it marks the first time that external surfaces of a spacecraft have been sampled for biological material during extra-vehicular activity, followed by analysis within the cabin environment.

Significance: The real-time data analysis provided by the compact LOCAD-PTS hardware allows biochemical analysis to be done anywhere. This is beneficial for developing capabilities of all types on Earth, but also for providing advanced monitoring on spacecraft, and for future applications for planetary protection.

Earth-based applications of LOCAD-PTS procedures include detecting hyperthermophiles (organism that thrives in extremely hot environments) in active volcanic craters, the detection of lethal viral outbreaks, and the evaluation of biological attacks in a military or civilian situation.

LOCAD-PTS technology benefits space flight by offering a drastic reduction in time for detection of fungi as well as gram negative and gram positive bacteria (minutes versus days) on ISS, thus demonstrating an alternative to the current methods for weekly monitoring of cleanliness, such as swabbing or culturing on petri dishes. This technology may eventually be used operationally to assess water, air, and food supplies in addition to common ISS surfaces.

It is believed that this type of rapid and portable technology has the potential to monitor the spread of Earth-derived biological material on the lunar surface following future lunar landings. This will be important preparation for the human exploration of Mars, where a major scientific goal will be the search for life and differentiation of that signal from biological material brought there by the crew and their spacecraft.