A close-up view of the JAXA-Granada Crystallization Facilities (GCF) during Expedition 14. (NASA Image: ISS014E20129) What was done on ISS: The JAXA and Roscosmos-sponsored investigation Japan Aerospace and Exploration Agency - Granada Crystallization Facility High Quality Protein Crystallization Project (JAXA-GCF), led by Dr. Hiroaki Tanaka of the Japan Space Forum, was a unique collaboration between several ISS International Partners. The inhibitor of human hematopoietic prostaglandin D2 synthase (HQL-79) [1] is a candidate treatment by inhibiting this enzyme upregulated in patients with Duchenne's muscular dystrophy [2]. Investigators used the microgravity environment of the ISS to grow larger crystals of better quality, which allowed them to more accurately determine the 3-dimensional structures of HQL-79 protein complex. The findings led to the development of a more potent form of the inhibitor which is important for the development of a novel treatment for Duchenne's muscular dystrophy [3]. Russian investigators have collaborated internationally to grow macromolecular crystals on ISS since 2001, including genetically engineered human insulin (deposited into protein data bank in 2008), tuberculosis, and cholera-derived pyrophosphatase. The next generation of Russian-Japanese collaboration in this area is the JAXA High Quality Protein Crystal Growth (HQPC) experiment installed in Kibo in August 2009. 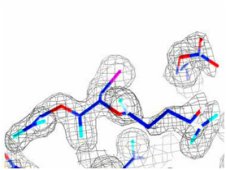 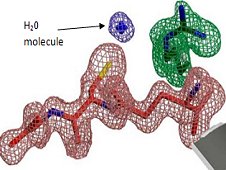 Electron Density Maps of HQL-79crystals grown on Earth show a smaller three-dimensional structure (top) as compared to those grown in space (bottom), which also uncovered the presence of a newly identified water molecule. (Figures courtesy of Yoshihiro Urade) Significance: Crystals grown in microgravity can help scientists gain detailed knowledge of the atomic, three-dimensional structure of many important protein molecules used in pharmaceutical research for cancer treatments, stroke prevention and other diseases. The knowledge gained could be instrumental in the design and testing of new drugs. On Earth, the protein crystallization process is hindered by forces of sedimentation and convection since the molecules in the crystal solution are not of uniform size and weight. This leads to many crystals of irregular shape and small size that are unusable for x-ray diffraction analysis. X-ray diffraction analysis is a complex process that requires several months to several years to complete, and the quality of information obtained about the three-dimensional structure of a protein is directly dependent on the degree of perfection of the crystals. Thus, the structures of many important proteins remain a mystery simply because researchers are unable to obtain crystals of high quality or large size. The microgravity environment aboard the ISS is relatively free from the effects of sedimentation and convection and provides an exceptional environment for crystal growth.