Grow Text SizeShrink Text Size
Walking on Air: NASA's Floating Treadmill
On the space station, astronauts are like superheroes. They twist and flip as easily as Olympic gymnasts and can hoist more weight than power lifters. 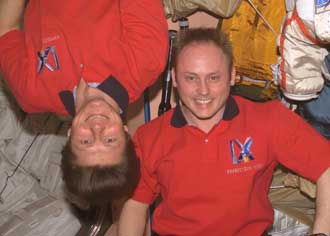 Living in space is indeed a dream come true, but over time it can cause an astronaut's bones to deteriorate. As NASA prepares to send humans back to the moon and eventually beyond, researchers are looking for new ways to keep astronauts' bones healthy and strong.

To do so, a team of engineers from NASA's Glenn Research Center and The Cleveland Clinic Foundation have developed a new treadmill that simulates the space environment. They'll begin testing with human participants in early spring.

The information they gather will help NASA design better exercise equipment and develop exercise routines for astronauts. It also could help doctors treat and prevent osteoporosis, a disease that threatens 44 million Americans.

In the absence of gravity, human bones don't have to perform their primary function of supporting the body's weight. As a result, space station astronauts experience disuse osteoporosis, a type of bone loss common in immobile patients.

The space station is outfitted with special exercise equipment designed to counteract this and other physiological changes that occur in space. Astronauts work out on this equipment up to two hours a day. But they still can lose as much as 1.5 percent of their bone mass per month. That's the same amount of bone a post-menopausal woman can lose in a year.

In space, just like on Earth, walking or running is an important way to keep bones healthy. That's why space station astronauts use their treadmill nearly every day. But researchers on Earth want to know more about how this exercise is working. To further study the effects of running in space, The Cleveland Clinic Foundation and Penn State University built a ground treadmill called the Zero Gravity Locomotion Simulator (ZLS). 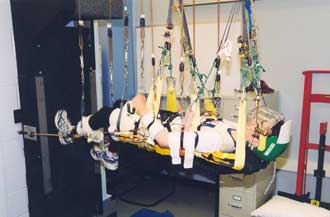 This unusual machine is mounted vertically in a free-standing frame and includes padded straps that support a runner under the head, torso, arms and legs. If that doesn't make sense, imagine running in place on a wall.

In this position, there's no gravitational force between the runner and the machine. Like the treadmill used on the space station, the ZLS has a harness with motors and cables to pull the runner toward the treadmill belt, exerting force on the bottom of the runner's feet.

Penn State and The Cleveland Clinic have used the ZLS for several years to study astronaut bone loss. But for this experiment, NASA must simulate the environment inside the space station as accurately as possible.

Unlike the ZLS, the treadmill on the space station is detached and actually floating inside the vehicle. This lightens the load to the space station and reduces vibrations that might disturb other experiments. As a result, the treadmill moves a bit with the runner, which may impact the type and amount of exercise an astronaut needs to stay healthy.

To reproduce this floating effect, NASA Glenn engineers added four bearings that look like hockey pucks to the bottom of the ZLS treadmill. These devices, called air bearings, have tiny holes that emit a thin film of air, causing the machine to float much like the puck on an air-hockey table. This hovering version of the exercise machine, which more closely replicates the on-orbit treadmill, is called the enhanced Zero Gravity Locomotion Simulator (eZLS).

Early this spring, NASA Glenn will begin testing the eZLS with human participants. Subjects, selected after careful health and fitness screening, will run on the hovering treadmill for 5 to 30 minutes at a time.

The data collected from these tests will help NASA to build exercise equipment and workout regimens that exert the optimal amount of force on the skeletal system to prevent bone loss. This will mean stronger, healthier crews with a lower risk of injury on the space station, the moon and Mars and shorter recovery periods for astronauts returning from long missions.

It could also enhance medical researchers' understanding of how exercise and inactivity impact osteoporosis, improving the health of millions of Americans at risk for this debilitating disease.