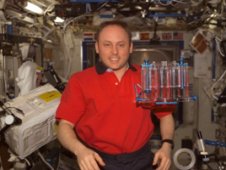 ISS Science Officer, Mike Fincke in the U.S. Lab during Expedition 9 next to CFE-CL2. (NASA Image: ISS009E23445) What was done on ISS: Controlling the flow of fluids in the absence of gravity is a challenge for designing spacecraft liquid propellant, water and recycling systems. In space, liquids can climb container walls, making it hard to empty containers, measure the contents of storage vessels, and obtain consistent performance in devices where liquids and vapor mix.

The Capillary Flow Experiment (CFE), led by Dr. Mark Weislogel of Portland State University, is a suite of fluid physics experiments whose purpose is to investigate capillary flows and phenomena in low gravity. CFE tests were operated during ISS Expeditions 9 through 16 (August 2004 – December 2007). Each experiment recorded the behavior of fluid in containers with different geometries and under different conditions to test how fluids flow in microgravity. Results of the capillary flow investigations are still being published. Initial results have shown the value of the apparatus as a benchmark for computational fluid dynamics models [1]. 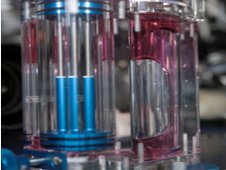