Grow Text SizeShrink Text Size
Cardiovascular System Gets 'Lazy' in Space; New Study Gets Blood Flowing on Station
On Earth, we all know gravity affects everything around us. But did you know gravity also influences what goes on inside our bodies? 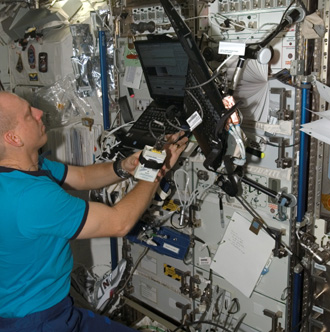 Every time we stand up, gravity pulls blood into parts of the body that are below the heart. A simple experiment you can do to prove this is to let your hand hang down for a short time then examine the veins in the back of your hand. These veins will get bigger because they are full of blood. But raise your arm above your head, and these veins, emptied of blood, disappear.

In space, there's a much different result. There's no gravity to pull blood into the lower part of the body. Instead, blood goes to the chest and head, causing astronauts to have puffy faces and bulging blood vessels in their necks.

And appearance isn't the only ugly side effect. The lack of blood flowing to and from the brain can cause astronauts to feel dizzy and sometimes even faint when they return to Earth's gravity.

That's why a new experiment on board the International Space Station -- called Cardiovascular and Cerebrovascular Control on Return from ISS (CCISS) -- is examining how long-duration exposure to microgravity affects crew members' heart functions, blood pressure and blood vessels that supply the brain.

"In our research, the major symptom of concern is fainting, because an astronaut could get hurt," said Richard Hughson, principal investigator for the CCISS experiment at the University of Waterloo in Ontario, Canada. "But even the less severe symptom of dizziness reflects a reduction in the blood flow to the brain. If the astronaut is not receiving enough brain blood flow, then he or she cannot think and perform critical actions properly."

Expedition 15 astronaut Clay Anderson is the first crew member to participate in the study, sponsored by the Canadian Space Agency. Researchers are measuring how Anderson's blood pressure and heart rate is regulated, and how his heart rate fluctuates as he goes about his daily routine.

To do this, Anderson wears a Holter monitor -- a portable device that measures his heart rate; a Continuous Blood Pressure Device (CBPD) -- a finger cuff that measures his blood pressure with every heart beat; and an Actiwatch -- a wrist monitor that detects and records his body movements. The data collected during the 10-minute blood pressure study, and the 24-hour collections of heart rate and physical activity are downlinked through the Payload Operations Center at NASA's Marshall Space Flight Center in Huntsville, Ala., for Hughson and his team to analyze.

The experiment also looks at the overall changes in the fitness of Anderson's cardiovascular system, searching for signs that it's become lazy from not having to work against gravity.

"Research on astronauts returning from long-duration stays on the space station has shown that over 80 percent experience some degree of lightheadedness shortly after returning from space," said Julie Robinson, International Space Station program scientist at the Johnson Space Center in Houston. "These are challenges that must be understood and countered in preparation for future exploration missions -- whether returning from the space station, moon or someday landing on Mars."

A third part of the experiment is conducted pre- and post-flight using a number of sensitive measurement devices to monitor blood flow and blood pressure in different regions of the body.

"From these experiments, we anticipate that the primary factors limiting the ability of the astronaut to tolerate the return to gravity after long-duration spaceflight will be the greater storage of blood by the veins and the poor function of the arteries to direct the blood to the brain," said Hughson. "We can make conclusions about the 'weak links' in the cardiovascular system and what is required to bring the astronauts back in good health."

Knowledge gained in the CCISS experiments also will be applied on Earth. Hughson heads the Vascular Aging Program within the Research Institute for Aging at the University of Waterloo. "We are using the methods we developed for studies of astronauts to investigate why older people faint more frequently and we will apply our results to reduce the incidence of fainting and falling in the elderly, thus reducing the risk of serious injury," Hughson added.