Grow Text SizeShrink Text Size
How to Manage Floating Fluids in Space
Six months is a long time to be away from home. But Astronaut Sunita Williams had plenty of work to keep her busy during her stay on the International Space Station, including a group of experiments she dubbed "lava lamp."

"I call it the 'lava lamp' experiment because some of the fluid is pink, and we hang out watching it with video and pictures," she wrote in her mission log. "If only we had a black light." 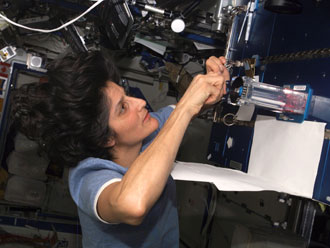 While the Capillary Flow Experiments (CFE) are mesmerizing, they actually have nothing to do with lava or lamps. They are a suite of three experiments designed to investigate how fluid flows in microgravity. The results will help engineers design more efficient fluid management systems, such as fuel tanks, cooling systems and water recycling systems, for future space missions.

The Problem with Microgravity

On Earth, fluid management systems rely on gravity. In your car, for instance, a pipe runs from the bottom of the fuel tank to the engine. Gravity positions the fuel at the bottom of the tank, and the fuel pump forces it through the pipe and up to the engine. But in space, where gravity is virtually absent, fluids aren't so predictable. Propellants float around inside of tanks, and water drops bounce about recycling systems. This makes designing fluid management systems for spacecraft a difficult endeavor.

"It's been a challenge since the 1950s," said project scientist Bob Green of NASA's Glenn Research Center. "Once you're in orbit, there's always an uncertainty about where the fluid is in the tank. As the tank drains and less fluid is left inside, it sometimes becomes a bigger problem."

To compensate, engineers have developed devices called vanes and screens. Vanes are grooves designed to guide fluid through a tank, and screens filter out bubbles. Both devices use capillary forces to position the fluid, or create "capillary flow." This scientific term describes the way the surface of a fluid responds when it comes in contact with a solid. Capillary flow occurs when the adhesive forces between the solid and the fluid are different than the cohesive forces within the fluid. 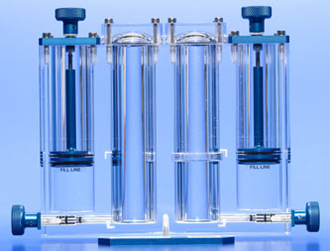 "A classic example of capillary flow is when you stick a tiny tube in a beaker of water," Green said. "The water will rise into the tube due to capillary action." The same effect causes porous materials, like paper towels and soil, to absorb water.

On Earth, the force of gravity typically overwhelms the capillary force, reducing the fluid rise to millimeters. But in space, where the force of gravity is nearly zero, capillaries such as vanes and screens carry fluids much higher. Scientists still have a lot to learn about the phenomenon in order to use it to its full potential. In fact, spacecraft have always flown with extra fuel, because some of it remains in the tank unaffected by the capillary devices.

The pink fluid that reminded Williams of a lava lamp is actually silicone oil floating inside a Plexiglas container. The experiments are comprised of six such containers, each simulating shapes and conditions commonly found in fluid management systems for space.

Since the first units launched in January 2004, astronauts Michael Fincke, William McArthur, Jeffrey Williams and Michael Lopez-Alegria all have operated at least one of them. During her long stay aboard the station, however, Sunita Williams worked with the Capillary Flow Experiments more than twice as many times as any other astronaut, earning herself a regal title from the team.

"Suni has operated the experiments nine times," said NASA Glenn project engineer Chuck Bunnell. "That's why we call her the Queen of CFE."

During operations, the team of scientists and engineers watched the astronauts conduct the experiments on a live video feed from NASA Glenn's Telescience Support Center. As they watched the fluid flow, they made changes to the procedures in real time by sending feedback to payload communications.

"The operations are the fun part," said Bunnell. "They're the culmination, like when you finally reach the peak of the mountain you've been climbing."

Principal Investigator Mark Weislogel and Co-Investigator Steven Collicott flew to Cleveland to participate in the first several operations. They watched the rest on live video from their offices at Portland State University and Purdue University.

"Watching the live downlink, we get the feeling of being able to perform the experiments ourselves," Weislogel said. "That's one of the great things about the space station. With shuttle experiments, you had one shot. But on ISS we've been able to benefit from trial and error, and we've collected much more data than we expected." 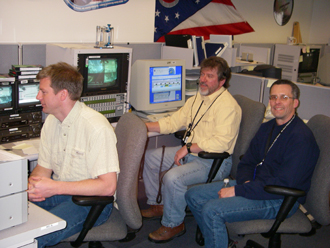 Weislogel and Collicott will review the videotapes of the experiment operations and spend the next 12 to 18 months analyzing the data before publishing the results in scientific journals. So far, they are pleased with the preliminary findings, which they say could change the way engineers design liquid fuel tanks, fuel lines, intravenous drips, cryogen storage tanks, thermal control systems, water purifiers and waste management systems for space applications.

That's not all. "The capabilities developed from capillary experiments have given us new tools to evaluate similar systems on the ground," Weislogel said. He believes results from the Capillary Flow Experiments also could be applied to designs for very small fluid systems on Earth, such as electronic cooling loops, fuel cells and medical fluid processing.

As for Williams, her reign over the "lava lamp" ended on June 22, when she came home on Atlantis with the crew of STS-117. But, to this team of scientists, she will always be known as "The Queen of CFE."