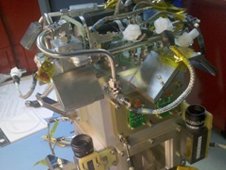 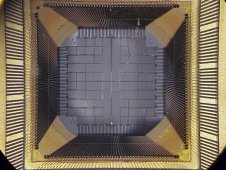 A close-up of a BXF microheater. (NASA) Ever heard the expression, "you don’t even know how to boil water?" Well, it's even more complex in space. But a new experiment aboard the International Space Station may help us here on Earth understand the role gravity plays in the boiling process and make space technologies more efficient.

Boiling is the conversion of a liquid into vapor. Boiling is used every day to cook food; generate steam to heat buildings or turn turbines; cool electrical generators; purify water; and help convert crude oil into gasoline.

The Boiling eXperiment Facility -- Microheater Array Boiling Experiment, or BXF MABE -- contains 96 individually controlled microheaters that will provide both location and time-dependent information to gain better insight into the boiling process. The experiment, which is targeted to launch on STS-133 Nov. 2, is a collaboration between the University of Maryland in College Park and NASA's Glenn Research Center in Cleveland, Ohio. It's one of two experiments in the station's new boiling facility.

"Boiling is heavily influenced by gravity," said Jungho Kim, principal investigator for the experiment at the University of Maryland. "The vapor bubble is less dense than its liquid; consequently, it wants to rise through the liquid. By reducing the effect of gravity, it becomes possible to examine other variables, such as how hot the heater is, how warm or cold the average liquid temperature is, and the effect of pressure and surface tension."

"Boiling is something that everyone can relate to because people have made pasta, macaroni and cheese and oatmeal on their stove," said John McQuillen, the project scientist at Glenn Research Center. "In space, boiling may also be found in generating vapor for turning turbines for power generation, temperature control aboard spacecraft and water purification, so it’s very important to understand the boiling process without the presence of gravity."

The experiment uses two arrays of 96 microheaters each. Each array is laid out in a 10 x 10 square, but with the corners missing. Each microheater in the array has its own control and measurement circuit. The way it works is similar to the rear-window defroster on automobiles, except on a tiny scale. The microheater is actually a thin trace of metal bonded to a transparent quartz base. When electricity is applied, the metal heats up and the quartz allows investigators to see through it.

Using a camera that looks through the microheaters, investigators can examine the relationship between the power levels and determine if vapor or liquid is above that microheater.

"Combined with normal gravity testing, we expect to confirm a relationship between the gravity level and heater size on the boiling process," said Kim. "If we are successful, we should be able to predict important parameters about boiling that will enable engineers to design space hardware that utilizes boiling."

The experiment will be installed in the Microgravity Science Glovebox -- an enclosed work space for fluids, flames and fumes -- in mid-November. The glovebox is located in the Destiny Laboratory. Following checkout of the hardware, actual testing is scheduled to begin by the end of the year.