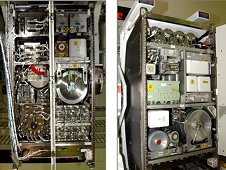 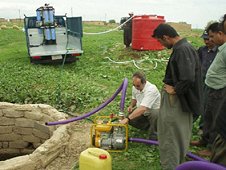 Volunteers help install and test a water purification system in Kendala, Iraq. (Concern for Kids)
View large image
Whether in the confines of the International Space Station or a tiny hut village in sub-Saharan Africa, drinkable water is vital for human survival. Unfortunately, many people around the world lack access to clean water. Using technology developed for the space station, at-risk areas can now gain access to advanced water filtration and purification systems, making a life-saving difference in these communities.

The nonprofit organization Concern for Kids, or CFK, in Nye, Mont., has provided aid and disaster relief to countries such as Malaysia, Iraq and Indonesia since 1992. Among other services, the group raises funds to install water delivery systems and water storage tanks in at-risk regions.

Years later, CFK representatives learned about a deep-water well failure in the tiny Kurdish village of Kendala, Iraq, which left its residents without access to drinkable water. The population quickly dwindled from 1,000 residents to a mere 150. Those remaining were forced to use a nearby creek that contained water contaminated by livestock, which they sifted through fabric to remove dirt and debris.

Todd Harrison was president of CFK's board of directors at the time and strongly empathized with the people of Kendala. He set out on a mission to revive this ailing community by improving the deplorable conditions. The solution came in the form of a familial connection that put Harrison in touch with NASA engineers who developed technology to provide clean water aboard the space station.

Harrison's sister, Robyn Carrasquillo, was the engineering manager for the Environmental Control and Life Support System, or ECLSS, project at NASA's Marshall Space Flight Center. She and her team of engineers were responsible for developing the cutting-edge water purification system that recycles air and water aboard the station.

By efficiently recycling wastewater aboard the space station, there is a reduced need to provide the resource via resupply -- which would not be an option for long-duration space travel. Without this capability, the station’s current logistics resupply capacity would not be able to support the standard population of six crew members. "In a year, the water saved by recycling exceeded the initial launch weight and weight of replacement parts due to some initial issues," commented Carrasquillo. Two principal components make up the International Space Station Regenerative ECLSS: The Water Recovery System, or WRS, and the Oxygen Generation System, or OGS. The WRS conducts the water purification and filtration process in the ECLSS. Commercial companies took an interest in this part of the ECLSS project, as they sought to adapt it to an Earth-based water treatment system.

Harrison discovered an interesting relationship between CFK's water filtration system and NASA because of his familiarity with his sister's work. NASA’s previous research and application provided the Microbial Check Valve, or MCV, an integral component of the purification and filtration process.

Originally developed for the Space Shuttle Program by Umpqua Research Corporation, the MCV was later sold to WSC. The MCV is an iodinated-resin that provides a simple way to control microbial growth in water without the use of power. By dispensing iodine into the water, it performs an important secondary nutritional function for the populace. This chemical, when added to the diet, promotes proper brain functions and maintains bodily hormone levels -- which regulate cell development and growth. Children who lack iodine in their diets exhibit growth mental retardation.

With the help of U.S. Army Civil Affairs and Psychological Operations Command (Airborne) personnel, a 2,000-liter water tank and fresh water were brought to the Kurdish village. Workers ensured that the water was clean and iodinated to prevent bacteria and virus contamination. Carrasquillo recalls the installation efforts and associated challenges. "[CFK] encountered some technical issues that our group helped with by phone. The MCV had dried out during transit and we were able to do an assessment and reassure them it should be okay. In addition, the pumps that were available in the local village were oversized for the filtration system."

Carrasquillo's team strategized and implemented a bypass that allowed workers to use the available pump and start the system immediately. This workaround enabled the successful processing of Kendala's water supply.

Joint collaborations between aid organizations and NASA technology show just how effectively space research can adapt to contribute answers to global needs. Since this initial effort, the commercialization of this station-related technology has provided aid and disaster relief for communities worldwide. Chiapas, Mexico; Kampang Salak, Malaysia; Sabana San Juan, Dominican Republic; Balakot, Pakistan; and Vera Cruz, Mexico are just a few examples of cities that benefited from this advanced filtration capability. Other related developments include a personalized device that uses forward osmosis to turn urine into drinking water. Water Security Corporation, or WSC, licensed the device for use in commercial ground-based filtration systems deployed around the world